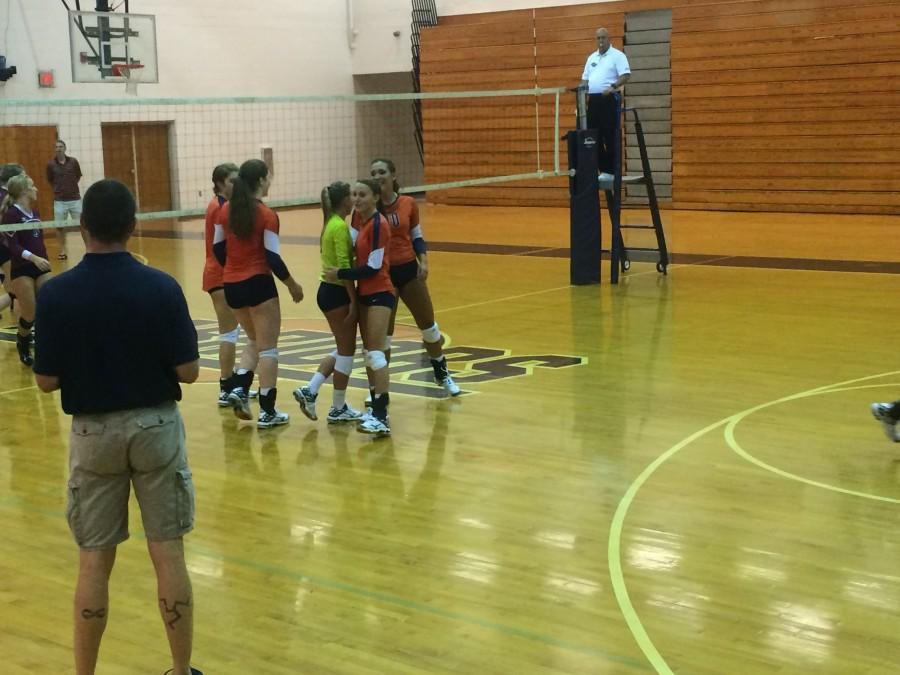 The Lady Warriors celebrate scoring a point as Coach Auld looks on.

“This team has probably the best team chemistry I’ve seen at the beginning of the season so far,” assistant coach Julie Hopp said.

After graduating four players from the 2014 6A state championship winning team, many wondered how NC would begin the 2015 season. Returning players showed their true colors throughout the night’s match, with junior setter Sam Aldridge’s 13 assists and senior Lizzie Daniel leading the team with ten kills.

“Even though it was just a scrimmage, we had a huge crowd full of friends and family, and the fanclub was great!” said Aldridge after the night’s win.

New starting defensive specialist, freshman Molly Pember, finished the night with six digs, and returning junior Katelynn Riner ended the match with 11 digs. Returning right side hitter, junior Moriah Hopkins, hit three kills over Woodstock’s attempted block.  With a win against one of the few teams to beat the Lady Warriors during the 2014 season, the team’s expectations rose.

Varsity volleyball’s next game takes them on the road to Brookwood high school on Tuesday August 12, where they faced tough competition in past seasons. The next home game remains scheduled for August 20 against Roswell high school.