Eat like a cave(wo)man: How Paleo saved my body 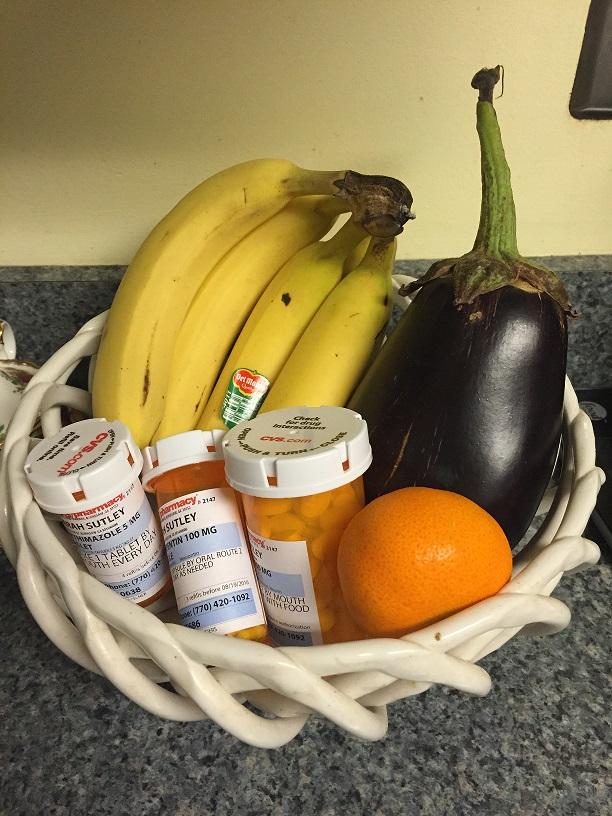 My prescriptions in a fruit basket, juxtaposing modern medicine and a natural remedy.

As someone experiencing relatively perfect health growing up, several recent encounters with life-changing diagnoses prompted me to examine the benefits of nutrition and their potential to surpass prescription medicines’ effects.

Prior to August 2014, a fractured wrist stood as my most serious medical concern. As a competitive softball player who always passed physicals with outstanding results, I considered myself the poster child for health. But, my record began to change the day a routine doctor’s visit turned into a trip to the emergency room.

That day in August, my pulse measured 170 bpm, over 100 beats higher than average. This placed me at increased risk for a heart attack and even though I remained relatively symptomless, I was immediately rushed to Scottish Rite. After hours of listening to the rhythm of a faint beep become slower and slower, doctors sent me home with numerous prescriptions for strong anti-thyroid, beta blocking, and blood pressure medicine, along with a diagnosis of Graves’ Disease.

As I quickly learned, Graves’ stands as an incurable autoimmune disorder, affecting the thyroid. In simpler terms, my immune system fails to recognize key differences between foreign invaders and functioning body cells, sending white blood cells to attack both. Basically, my body destroyed an important hormone-releasing organ. Symptoms of Graves’ Disease range from fatigue, sweats, and tremors to heart arrhythmia. The disease can go into remission, but often reappears in the form of a life-threatening event, known as a thyroid storm, which I experienced at the hospital.

Forced to take strong medications to prevent my heart rate from skyrocketing again, I quickly found myself suffering from numerous side effects. Weeks into my junior year, arguably one of the most difficult years in school, I experienced extreme fatigue, brain fog, and rapid weight gain. With strict orders to forgo any form of cardio exercise, my goal of lettering in softball all four years quickly ended and I was left with few options to keep my weight under control. Time that I previously spent playing sports transformed into time spent at the gym. I dedicated hours to a self-developed weightlifting program and ate strictly low-calorie meals.

Fortunately, dieting is not a foreign concept to me. I consider myself gluten-free, a concept I implemented four years ago to ease digestive issues in my early teen years. Because of my weight gain in the following months, almost everything I ate adorned a “diet” label and contained extreme amounts of artificial sweeteners. Additionally, I began downing several cups of strong coffee and even resorting to taking caffeine pills to combat fatigue and simply make it through the day. As I would later realize, these habits proved further detrimental to my already deteriorating health.

In November 2014, I began experiencing numbness and tingling in my feet during exercise. This feeling typically subsided after my workout, but I remained concerned nonetheless. The sensation progressively worsened, forcing another trip to the Scottish Rite Emergency Room on New Years Day. I lost all feeling in my left foot and was quickly referred to a specialist.

My frustration with the medical system began on January 1 and remains a prominent issue in my life. After visiting a variety of doctors including an endocrinologist, podiatrist, orthopedic, and neurologist, the cause of my numb extremities remains undiagnosed. Nonetheless, my nerve pain began to worsen over the summer, causing frequent and debilitating leg cramps. I have endured multiple MRIs, an EMG, and frequent blood tests, with little success.  The nerve damage in my feet is likely permanent, meaning both feet will remain numb for the rest of my life. Although each doctor fosters their own theory, most simply resorted to prescribing strong pain medications like Lyrica and Gabapentin.

Taking prescription strength Ibuprofen three times a day for months kept most of my cramps at bay, but I continued to live in pain everyday. Forced to leave school because I simply could not sit still in a desk and lying awake, icing my feet and legs in the middle of the night began to take a toll on my mental health. I often refused the strong medications based on fear of serious side effects and their impact on me. Although they remain unsure of the cause, doctors stood firm on one thing throughout the process-my pain stemmed from an inflammatory response in my body. At that moment I picked up that idea and ran with it, deciding to take my health into my own hands.

I always possessed some interest in nutrition, but I found a passion for the specific aspect of personal health when I began researching how to make myself feel better, the natural way. I spent hours learning the impact certain foods have on the body and I started to wonder how much nutrition really matters. Among many other things, my research taught me the dangers of artificial sweeteners.

After receiving my Graves’ diagnosis, Splenda and Aspartame played a crucial role in my diet. At the time, I remained oblivious to the fact that these zero calorie sugar substitutes pass through the body undigested. Additionally, people with autoimmune diseases stand at increased risk, as the artificial sweeteners tend to build up along the digestive lining and block absorption of crucial nutrients. Many of my blood tests revealed vitamin deficiencies and I credit myself with finding the culprit.

Furthermore, scouring blogs and reading about people experiencing similar problems allowed me to devise a plan. My mom informed me of a possible correlation between Graves’ Disease and nerve pain and, around the same time, I read a variety of promising articles about the Paleo Diet. Both professionals and ordinary people advocated the Paleo Diet as a relief for those suffering from autoimmune diseases. Some studies even report the diet as a method to quickly send Graves’ into remission.

I decided to try out the so-called “magic cure” for myself, hoping my daily pain would subside. Jumping head first and eager into a strict paleo regiment, I failed to realize the difficulty of making such a drastic lifestyle change.

The Paleo Diet derives itself from human ancestors hunting and gathering tactics. Many people describe the diet as “eating like a caveman,” which requires the elimination of all processed foods. Although a variety of paleo protocols exist, I decided to follow the basic diet, eliminating grains, dairy, starchy vegetables, legumes, and sugar. Basically, my new diet would consist of meats, vegetables, fruit, nuts, and seeds. Many follow the diet with goals of losing weight, but paleo also stands as highly anti inflammatory-exactly what I needed.

My first week paleo served as the most difficult. Forced to forgo my first and second… and third cup of coffee left me with a pounding headache and an irritable attitude. I remain extremely fortunate, as my mom dedicates an immense amount of time cooking interesting and delicious Paleo foods, but I definitely missed the little things. Unable to eat ketchup, butter, or added salt, my meals are relatively plain. Fortunately, following the Paleo Diet allowed me to find appreciation in the true taste of good food, without the unhealthy additives.

Living paleo presents many challenges. Because I must eat natural and preservative-free food, eating out remains difficult. Organic foods stand as extremely pricy, compared to normal groceries, and I am incredibly thankful that my parents remain willing to support my experiment. Also, I try to be as adaptable as possible, but school events, parties, and social gatherings frequently bring my situation to light. While everyone else enjoys pizza or indulges in their large chocolate milkshake, I must go without. This aspect of the Paleo Diet often leaves me feeling left out, but I manage, with the knowledge that I am doing something challenging that may benefit my health in the future.

Luckily, after only a short time eating Paleo, I found myself surprised by my improved condition. Every day, my legs endured fewer and fewer cramps. I decreased my ibuprofen dosage daily and, even though the medication formerly prevented me from suffering debilitating pain, in time I was able to stop taking the pills completely.

Additionally, after receiving my monthly thyroid levels, I witnessed all of my hormone levels in normal range for the first time since my diagnosis in August 2015. My Graves’ Disease was, in fact, entering remission. On the other hand, my digestive system reaped some unexpected benefits from the Paleo Diet. Frequent bloating and general discomfort, which became normal and expected for me on a daily basis, subsided. Generally speaking, I feel better than I have in more than a year, simply due to the way I eat.

With all points considered, my experiences continue to expose the prominence of nutrition in modern society. Although I previously imagined attending college on a softball scholarship to study journalism, I owe adversity for exposing my true passion. Now hoping to become a registered dietician, I believe my experiences can assist others. I plan to research diet’s effect on chronic illnesses and find natural alternatives to harsh medications, because I feel that everyone needs to understand the extent of what they put in their bodies. Even though many aspects of my condition remain undiagnosed, I remain proud of my ability to take responsibility for my own health. Above all, I believe that, although eating Paleo stands as an unnecessary extreme for most, people deserve education in the area of nutrition’s daily impact, allowing them the chance to help themselves and make educated decisions about food, as I did. 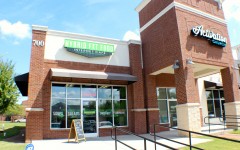 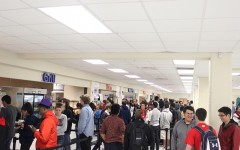 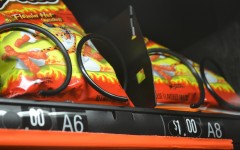