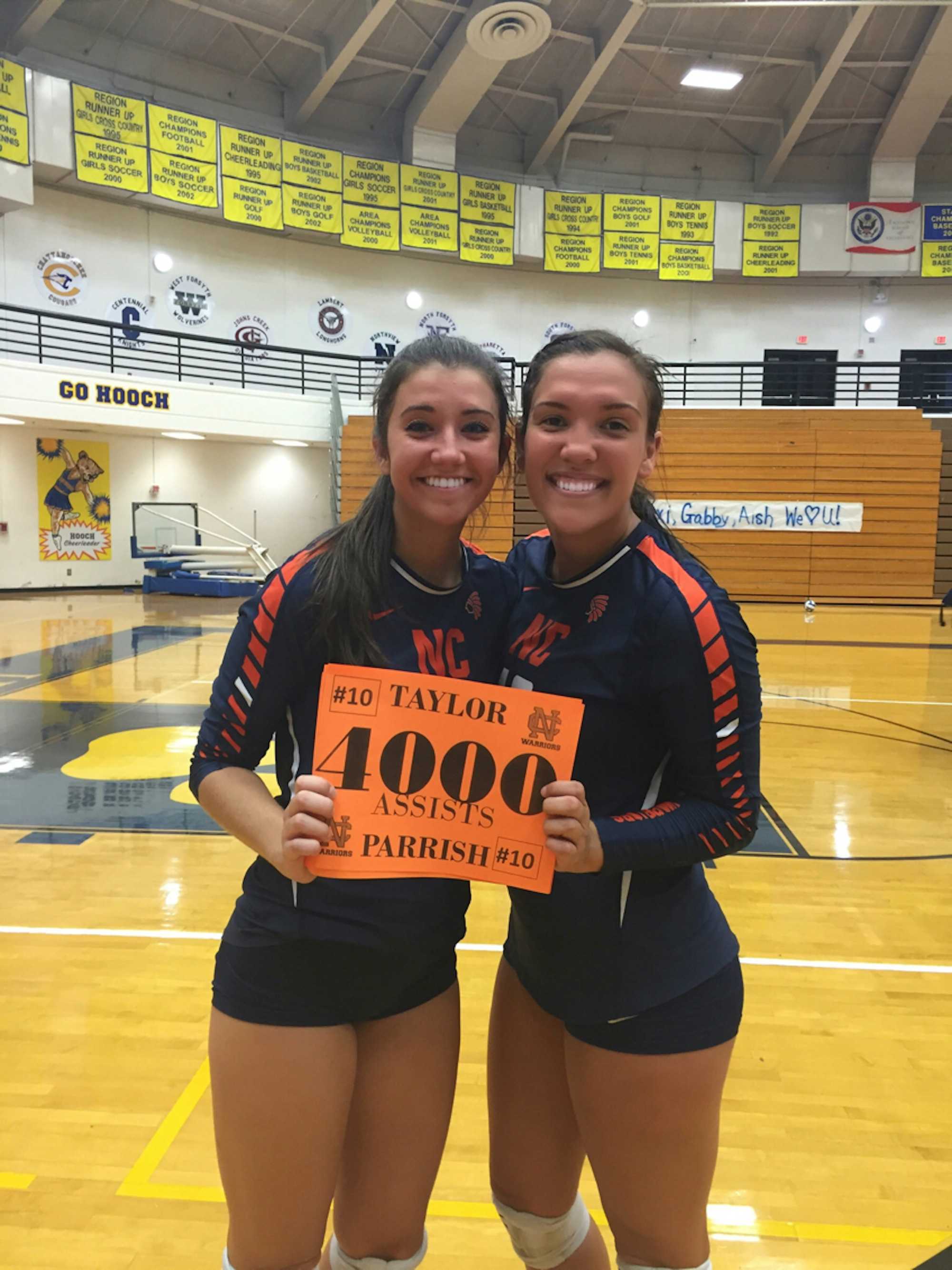 Parrish (right) smiles with teammate Shannon Callan after becoming one of three girls in state history to tally 4000 assists. (Courtesy of Mo' Hopkins)

Parrish (right) smiles with teammate Shannon Callan after becoming one of three girls in state history to tally 4000 assists.

Following a playoff loss, the final game of her record-breaking career, senior setter Taylor Parrish could not help but to shed a tear.

“It was very emotional, so many emotions were going through my head. I wasn’t ready for my season to end that soon,” she said.

Although her senior year did not finish the way she wanted it to, Parrish, a four-year starter, helped lead her team to a state championship as a junior, and contributed on Final Four and Elite Eight teams during her freshman and sophomore years.

“The playoffs are always awesome,” Parrish said. “You have to take those games point by point and then game by game. I played every game like it was my last.”

Among the plethora of special moments Parrish experienced in her career, from winning the state championship, breaking NC assist and ace records, and becoming one of only three girls to ever tally 4000 assists in the state, the win against East Coweta in the Final Four during her junior year holds a special place in her heart.

“The energy in the gym was so amazing like I can’t even describe the feeling it gave me to play,” she said. “Knowing we were going to state was unreal, all the blood, fight and tears we put into the season paid off.”

Parrish found her passion for volleyball in middle school, forcing her to leave basketball, her original sport, behind.

“My sixth grade year I tried out for the North Cobb middle school team and made the ‘A’ team and after that year I fell in love with the game. I had to quit basketball coming into high school and took on volleyball as my life for the next four years.”

Parrish finished her career at NC with 4,161 assists and 275 aces, both school records. She also tallied 886 digs and 134 blocks, ranking third and fourth in school history, respectively.

Parrish’s team-mates speak equally as highly as her stats do.

“Taylor is a really strong leader,” junior right-side hitter Mo Hopkins said. “She doesn’t just lead by instruction but she leads by example too. She sets the bar for everyone else and it’s an understood expectation for the rest of us to match her level of intensity.”

Hopkins attributes Parrish with making her a better player and motivating the girls to play to the highest of their ability.

“She makes me and everyone else want to raise our game constantly no matter if it’s in practice or in a match. I give her huge credit for making me the type of player I am and it’s because of her leadership and the way she plays.”

Parrish committed to the University of West Alabama to play volleyball on a full scholarship and signs in November. The program there made a significant impression on Parrish as she committed following her first visit.

“It felt like home,” Parrish said. “I fell in love with the girls and I could see how much the coach believed in me. The program they have made is one that I’m going to be proud to be a part of.”

NC helped Parrish form everlasting relationships with coaches and players that she will always cherish. These relationships heavily outweigh her numerous accomplishments from her perspective.

“If there is one thing I can say about North Cobb volleyball,” Parrish said. “It’s that it’s not about the talent we have or the amount of D1 players that come out of our program, but it’s about the family and sisterhood we form over the years.”