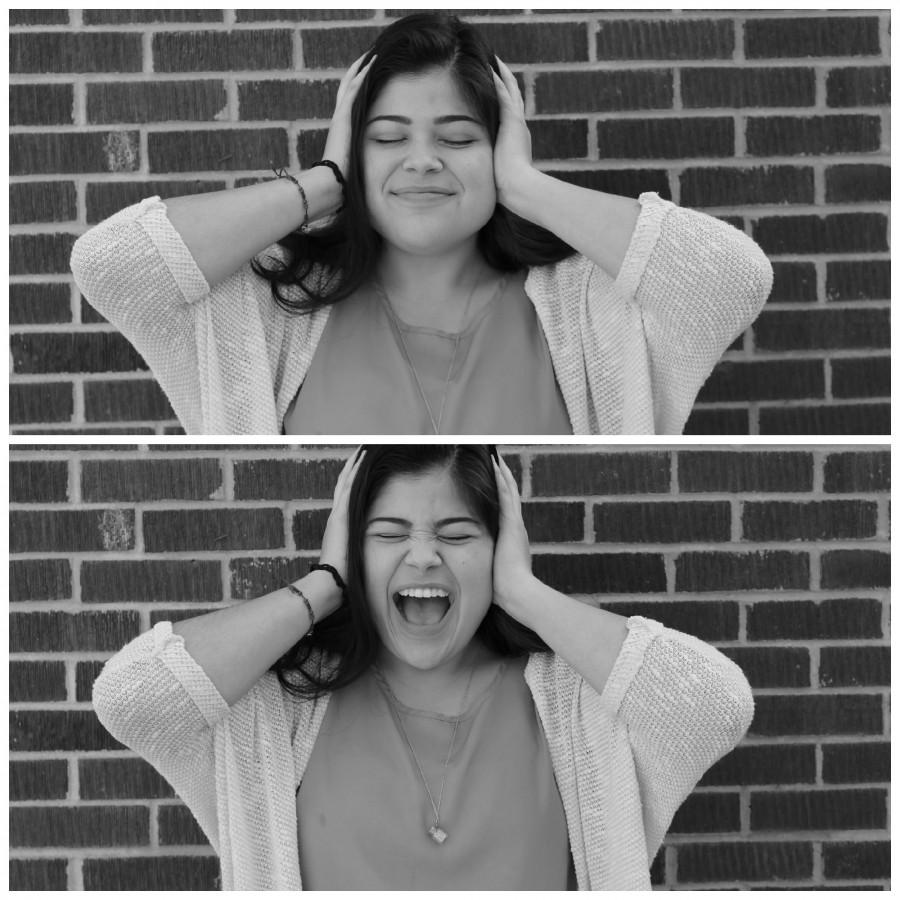 Junior Jocelyn Esquivel demonstrates the transition from a calm state to an anxious one, and comments on the issue of mental health: “Mental health is extremely important because it improves the quality of our lives in ways we wouldn’t expect it to.”

Teenagers should not suffer through mental illness alone, especially those unable to cope without assistance. Societal views of prescription drug use fall under a negative image, speaking to the amount of empathy, or lack thereof, present in community leaders. Medications such as antidepressants, ADHD suppressants, and even anti-anxiety medications take hits from all angles, but those who take the medication feel otherwise.

Teenagers, such as junior Kaitlyn Baggett who takes prescribed medication, describe their experiences as nothing but positive. “It actually really helped my grades and improved school for me overall,” Baggett said. “It was no longer a problem, I was able to learn. There are so many great things that this medication does. I was having severe struggles in school to the point that doing basic math was a problem, and I wasn’t able to be efficient in school. It took me five hours, most of the time more, to do homework. The people in my life were very thankful for a medicine like concerta.”

Teens needing medication often receive negative attention due to perceived ineptitude, but the perception could not be further from the truth. It requires courage and bravery to admit that you need medication, go to a doctor, and actively seek help; these actions do not come naturally.

“It’s negative because people don’t really believe ADHD is a problem, they think that they are just paying a lot of money for a placebo effect,” Baggett said. “My parents expect me to succeed no matter what. But other people expect me to fail more than they expect me to succeed. They see my ADHD as some huge learning disability, but it just hinders my focus. I want to be treated normally just like everyone else.”

Imagine for a second, a diagnosis of chronic illness, but no medication exists to cure the disease. People keep saying the illness does not exist; no one will listen to the sufferer’s desperate cries for help. After a while, they begin to believe that their illness only exists as a figment of  an active imagination, and start assuming the blame. Finally the day comes, they die from the disease that stole their life from the inside out, and no one suspected it. At their funeral, everyone asks, “How did it get this bad? Why didn’t they ask for help? I would have helped them.” The story jerks tears and makes waves among those unfamiliar with  mental illness, but for those who live with it, they know this story all too well.

Warning: The following recount contains information and content that some may find disturbing.

“Well at first it started out as anxiety, and then gradually when I got less anxious it turned into depression,” junior Mia Devery said. “I had been drinking a lot and going to parties and having sex with strangers just to try to feel something. When I stopped drinking was when I realized how depressed I really was. It was like the shot of Novocaine wore off. Then I started therapy and stuff but my whole summer was spent lying in bed not wanting to get up or hangout with anyone. I had therapy twice a week but it wasn’t helping. I tried convincing my parents to let me get on meds but they weren’t convinced I even had depression. It took months for them to finally let me start antidepressants, and when school started again my anxiety came back and I would skip so many days of school because of anxiety. And then I had suicidal thoughts so they changed my medicine, a little later I convinced my parents to let me go to a treatment program. They agreed but the program was hundreds of dollars a day and we couldn’t afford it and our insurance wasn’t covering it and I felt hopeless. A few days after the meeting with the program, I attempted suicide by drinking vodka and swallowing pills. After I spent a week in the hospital I came back and realized I didn’t wanna give up on myself. So now here I am fighting for myself.”

At fifteen years old and dealing with mental illness, I could not live my life as a healthy, functioning member of society. Anxiety overwhelmed every one of my senses, turned my dreams into horrifying nightmares, and fighting it left me exhausted every day. When I had nothing left for it to take, it scraped my skull for more; living with a beast that no one can see, but would scare the bravest of soldiers.

It all started one day in October, ironically when I thought everything just began to be okay again. My friends and I could not be closer; my life seemed to come around full swing with everything I worked so hard for at the forefront. But then it came, hitting me like a tidal wave and pulling me under with a current so strong that I drowned a thousand times. The code red that took place that day triggered my anxiety, and I still do not have any idea why to this very day; I like to think of myself as brave, but after that day I slowly unraveled, the epitome of a coward.

I blacked out in fourth period due to the impressive amount of adrenaline I pumped out; it took every ounce of strength I had. This continued for six months. I ended up missing most of school, and if I went to school, by the time I got home I had gone through at least two separate anxiety attacks and fell asleep shortly after trying to study. I tried hard to study, but after days of facing my peers after my embarrassing panic attacks and sitting in bathrooms trying to conjure happiness, exhaustion got the best of me. I started therapy in February, the diagnosis read “agoraphobia, general anxiety disorder, and clinical depression,” but none of those words spelled my name, so I ignored them.

How do you define sadness, put parameters on hopelessness, or begin to explain the inner workings of my mind, to me?

I started antidepressants in March. My allergic reaction to all forms of antidepressants rendered them useless, but in April, my life changed for the better. At first my parents thought that Adderall could not possibly help me, but after all that I had been through, they decided to take a chance on it. Right from the start I saw results: my antsiness had gone away, when I tried to focus I didn’t get tired like I had before, and my grades improved significantly. Adderall saved me from the downward spiral of depression and anxiety that ultimately would have ended in suicide.

The most challenging things in life to overcome? Those that strip people of their armor and send them into the world without any protection. Help yourself, even if you find yourself alone at two in the morning and crying for help, because people will help you. Good people always find their way into your life if you open it up to them.