Folson scores on court and in classroom 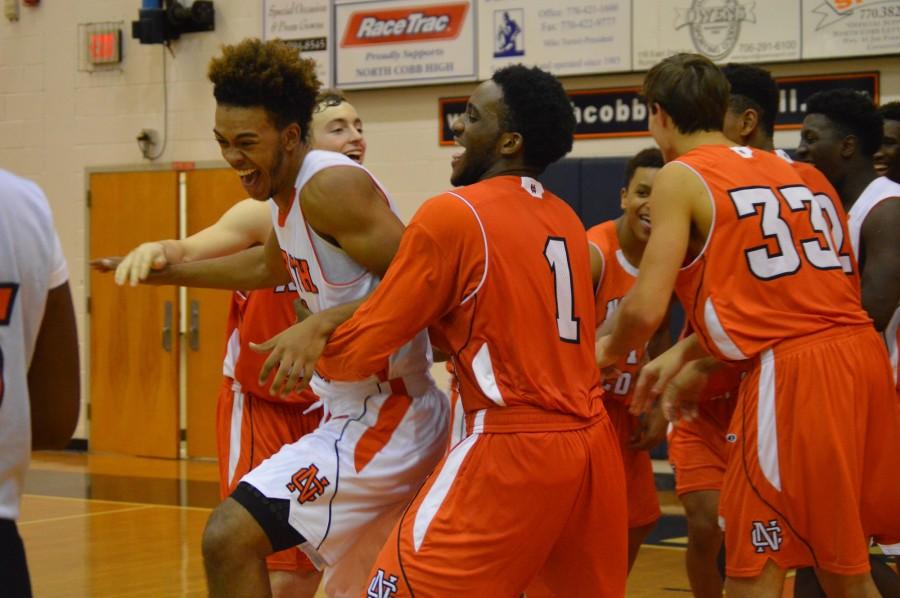 Folson with his teammates during the scrimmage. Senior Kenny Ume, pictured above, said “Bryce is one of my good friends, I’ve known him since seventh grade and he’s one of the best passers on the team. He is one of the most level-headed, chill dudes I know, both on and off the court.”

Folson boasts a 12-year long relationship with basketball. His parents put him on a team for exercise at six years old, which carried into his middle and high school years. He hopes to continue the trend into college.

Folson, though nervous for next year’s basketball team, believes the three remaining varsity players will step up to lead the team. He looks forward to seeing the JV players’ potential on varsity. “If the sophomores stay they will be good in two years… and I think the juniors are going to do good, honestly, the JV team has only lost one game, so they are good for JV, so in two years they will be good.”

While he awaits moving on to a new chapter in his life, Folson still worries about missing his team. “On and off the court, they are my second family.”

Off the court, Folson works hard as an academically driven and talented student. He started out in NC’s Magnet program, but later decided to leave for time management. Though he no longer participates in the program, Folson still takes advanced-level classes.

Though early in their teacher-student relationship, Cara Hamilton shares her experience of having Folson in her class: “He is quiet, on task laid back and gets his work done… It’s been a pleasure teaching him and he seems great,” Hamilton said. “The potential for his greatness is as high as his hair.”

As for the college he plans to attend, Folson does not prefer one over another.“It doesn’t really matter, big school, small school,” Folson said. “If I go to a small school I could transfer to a big school. If i had to pick my dream school is UGA though.”

Playing a sport as involved as basketball and taking AP classes taught Folson how to balance schoolwork and social life.

“It definitely teaches you time management. You have to be able to determine what you can and can’t do on certain days.”

Folson dedicates his athletic and academic talent to the NC Warriors. While balancing complex classes and a basketball roster spot, Folson manages to exude school spirit and exemplify the prototypical well-rounded student.