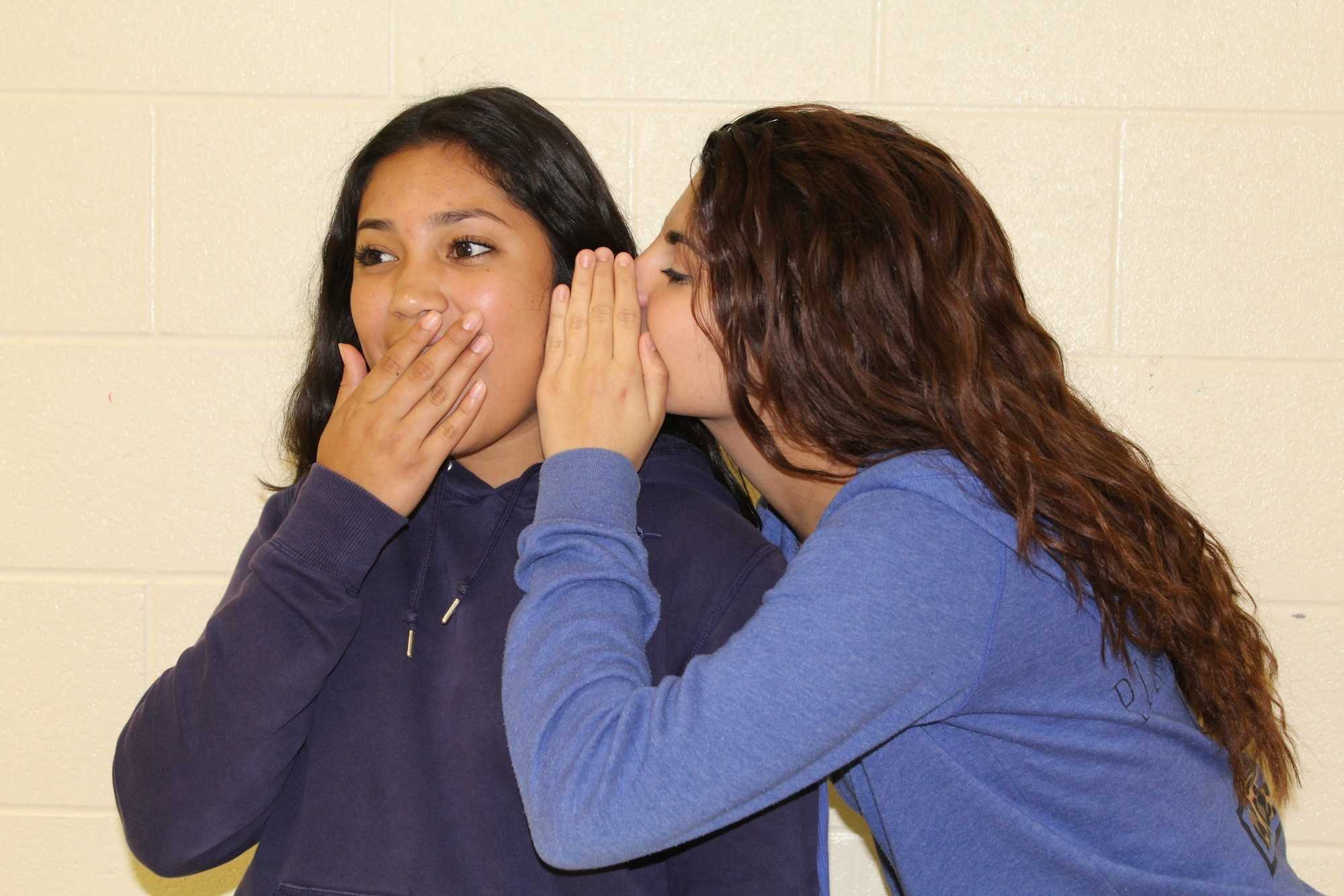 NC sophomore Najda Sahovic starts the cycle a rumor goes through as she whispers to another NC sophomore Stephanie Garcia. Garcia will further the spread of the rumor by telling other classmates as a general pass-time. (Chloe Roberson)

NC sophomore Najda Sahovic starts the cycle a rumor goes through as she whispers to another NC sophomore Stephanie Garcia. Garcia will further the spread of the rumor by telling other classmates as a general pass-time.

Rumor has it: Gossip in the halls of NC

The Social Issues Research Centre, an independent non-profit in Oxford, United Kingdom, claims that gossip accounts for 55% of men’s conversation time and 67% of women’s. Nigel Nicholson, Ph.D, points out the two sides to the act of gossip, the first side from the gossiper, who typically enjoys spreading the rumor and seeing its destructive path, and the other side as the victim who experiences the effects of the gossip.

Many teenagers and adolescents falsely believe that rumors, much like drama, constitute an innocent part of teen life. Katie Beth Nichols, in her article titled “Gossip and Rumors,” defined a rumor as “a currently circulating story or report concerning uncertain or doubtful truth.” Additionally, psychologist and contributor to Psychology Today Martin Teicher asserts that “verbal aggression literally changes the structure of a child’s developing brain,” meaning that when a person gossips about a child and that child overhears or learns of the gossip, it serves as verbal abuse.

Nichols also observed that all people fall victim to temptation to listen for a juicy rumor about others. According to chealth.canoe.com, everyone knowingly or unknowingly begins to gossip almost as soon as they learn to speak.

Media moguls such as Kim Kardashian back reality series and sell magazines for their gossip, basking in tremendous profits because they tap into a quirk of human nature.

“Every time I see Kim Kardashian on a tabloid I feel like I have to pick it up, I mean, she’s Kim Kardasian,” sophomore Najda Sahovic said.

Blogging serves as a popular pastime for individuals who relish the idea and opportunity to give everyone who will listen a piece of their minds. Individuals who embrace the argument that gossiping and spreading rumors performs an important psychological function claim it dissuades groups away from unacceptable behavior.

Today in teen culture, the most common forms regarding rumor transmission come through social media. The internet makes it easy to spread a rumor in nanoseconds from an online interface to a broad audience; a prime example includes a hoax reporting two explosions in the White House injured President Barack Obama, with the rumor originating from a certified press account. Gizmodo.com indicates that some teenagers wrongfully believe that they bear less responsibility when they spread a rumor online because they can do it anonymously. However, when a person spreads a rumor online, people can easily search for the truth.

For example, most have heard of various rumors regarding alleged celebrity deaths. Lately, the most common rumors with a long shelf life typically involve Justin Bieber. Other notable celebrity rumors concerning death hoaxes circulated on the internet have involved Adam Sandler, Charlie Sheen, Lindsay Lohan, Nick Jonas, and Taylor Swift. The Social Media Sun conveyed their theory behind such rumors, labeling such people as “haters.”

“I think kids spread rumors or gossip because they are bored,” sophomore Sophia Praino said.

Whether one labels themselves as skeptical or gullible, most people feel temptation to buy into rumors at some point. A writer for BeingGirl blog claims, “Gossip is like fast food…juicy, delicious, and bad for you.”

Taylor Clark noted in her article titled “The 81/2 Laws of Rumor Spread” that rumors slip under mental defenses before people can verify them. Clark also observed that the best and most devious rumors sometimes go well beyond common sense. For example, a case study conducted at Ohio University by Mark Pezzo concerning student rumors involved someone on campus dying of meningitis. Pezzo found that the story spread quickly as anxious students inquired so vociferously that everyone attempted to find out if the rumor held truth. The rumor mill grabbed the story, and before his audience knew it, students began proclaiming that all students on campus must obtain spinal taps immediately.

From this study, Pezzo coined the terms “unfit rumors” and “fit rumors.” Unfit rumors die quickly because of their exaggerated nature. In contrast, fit rumors survive due to a semblance of truth and spread like wildfire.

University of Washington researchers discovered that tweets from “official accounts” like government agencies, media outlets, and emergency responders can forestall the infectious rumors on Twitter and other major social media sites by correcting misinformation. According to The Sociology of Deviant Behavior, a criminology textbook, the person who initiates the rumor may experience momentary feelings of euphoria and emotional release. While gossip may boost the self-esteem of persons spreading the rumor, they may also experience a feeling of intimacy stemming from members of the “clique” or “it crowd.” However, the fallout from the rumor may leave teenagers feeling excluded, which contradicts the way most teenagers feel: a need for acceptance from their peers.

Consequently, the offended teen may begin a downward spiral of emotions that can lead to short or long-term depression. A research novel by Edwin R. Gerler, Canaray C. Hogan, and Kathleen O’Rourke distinguished that if the adolescent’s downward spiral fails to correct the rumor, it can become the catalyst for early drug use, dysfunctional social development, and may even result in suicidal thoughts. According to BullyingStatistics.org, some victims have been tormented to such a degree that they become angry and retaliate with violence. The events that occurred at Columbine High School on April 20, 1999 exemplify this.

Social media can serve as a powerful tool if used correctly, spreading rumors quickly because of its ease of access. Whether school rumors attribute to jealousy, boredom, or the power of being “the one in the know,” celebrating the misery of others remains counterproductive.

If such rumors target a student, blog BeingGirl recommends the following ideas: “Try hard not to protest too much. An overreaction can reaffirm to persons spreading the rumor that you are being untruthful; Hold your head up as if nothing were different, accepting that it is unproductive to identify who started the rumor;  In situations where the offending person has been identified, confront them calmly and explain that the rumor they are disseminating is mean-spirited and false. Afford them a chance to explain their actions; Know that time will heal all wounds and in most cases persons move on to the next hot story of the week.”

In cases that involve cyber gossip teens should keep in mind that spreading rumors online differs from face to face encounters. Without hearing a voice spreading the rumor, one cannot always determine if someone intends to joke.

Teenagers need to have a line of defense during stressful social situations. Teenshealth.org recommends that they should speak to an adult such as a parent, school counselor, or teacher. One helpful tip: find an associate with trustworthy and loyal friends who can render emotional support until the rumor subsides. It can also help to find an activity or project to engage in that can help to rebuild confidence and inner strength against false rumors.

One Response to “Rumor has it: Gossip in the halls of NC”