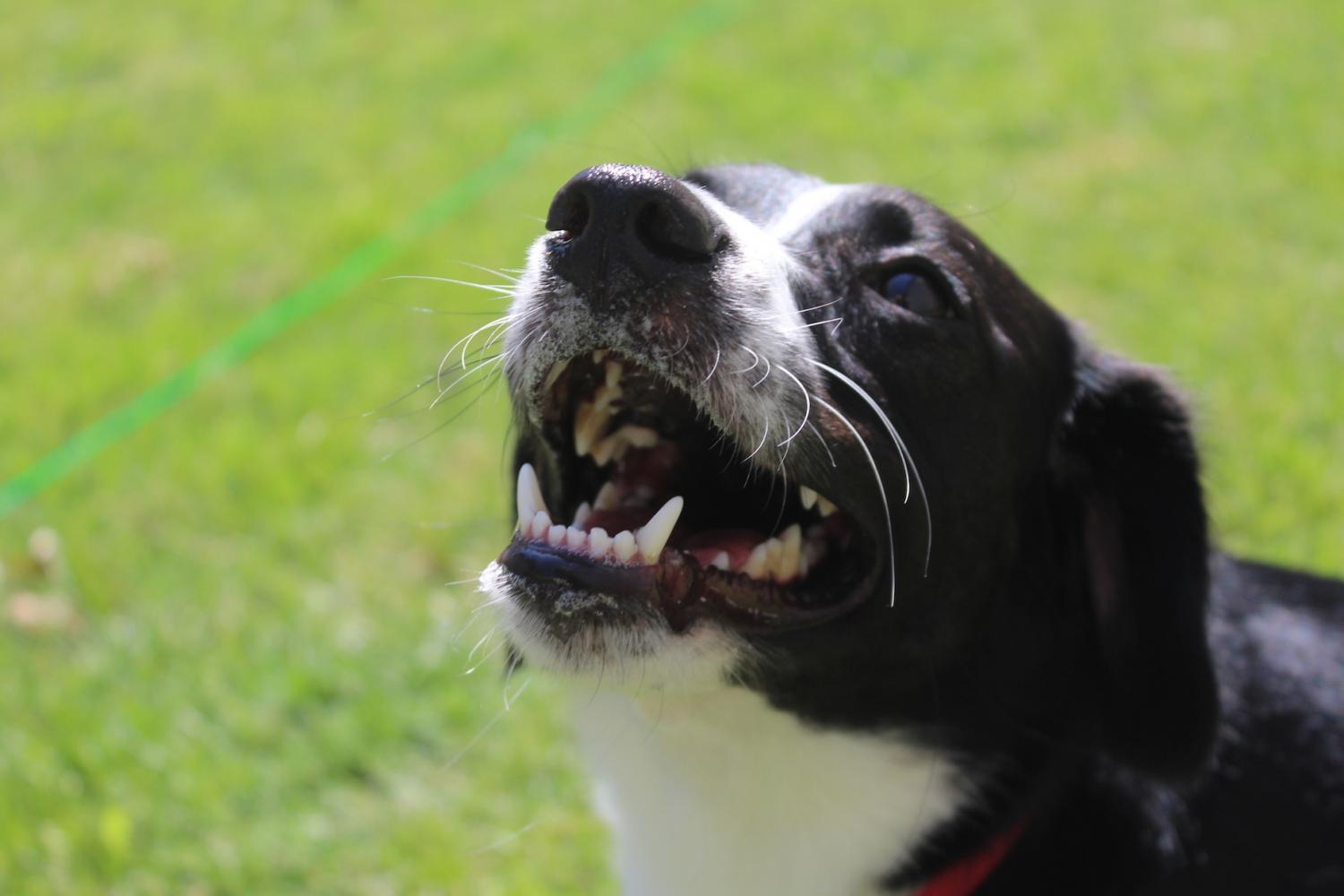 When the Sarah McLachlan song, “In the Arms of an Angel,” begins playing in the background of an American Society for the Prevention of Cruelty to Animals (ASPCA) commercial, most animal lovers instantly feel an overpowering sense of hopelessness. With over 2.7 million cats and dogs euthanized every year in America, the hope of rescuing each and every animal slowly vanishes.

“When I see the ASPCA commercial on tv, my heart breaks. Dogs do not deserve the terrible experiences their put under. Make a difference, and please help out” sophomore Angel Ledesma said. 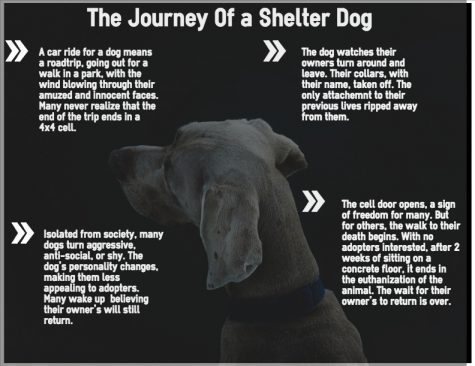 Euthanization rates continue to increase due to an immense overcrowding of shelters caused by accidental reproduction of cats and dogs. Other factors include owners abandoning or losing their pets.

Organizations around the nation vigorously act to try and reverse the outnumbering amount of euthanizations in shelters. The Cherokee Humane Society, along with the Humane Society of Cobb County, rescue and attain homes for a substantial amount of cats and dogs in the local community, saving 90 percent  of the animals that come through their doors.

Kelsey Bacak, a senior at NC, rescued her first dog in summer of 2013. Bacak referred to Angels Among Us and The Humane Society to adopt out her three dogs, and advocates for people to adopt and not buy.

“I knew there were so many rescue organizations that I could find a dog from, and I would be contributing to a good cause,” Bacak said.

In a study conducted by DogTime, 3,000 survey participants answered to whether they would buy or adopt an animal from a shelter. From the 3,000 participants, 24% would rather buy from a breeder or a shelter that practices euthanization of healthy and adoptable pets. 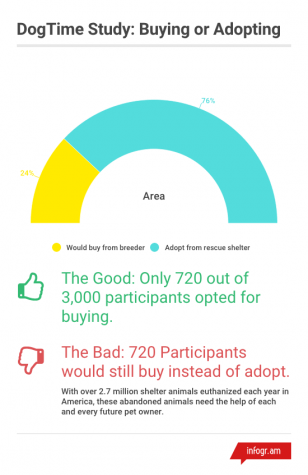 While the remaining participants opted out of buying from breeders, the percentage of people who would buy instead of adopt alarms animal rescue groups. Breeders, pet stores, and kennels can cost a shelter pet its life.

According to Animal Rights Action, purchasing a puppy from a breeder increases the chances of euthanizing an innocent shelter animal. Purchasing from breeders also increases the likelihood for a large amount of pet owners to breed their own dogs for profit. According to Friends of Animals, the puppy mill market supplies pet stores with over one million puppies each year, making the market enticing for many. The demand for breeders increases, and people keep purchasing, so a vicious cycle starts to occur that results in an overpopulation of dogs and cats.

Consequences of breeding range widely, with inbreeding serving as the most dangerous. Inbreeding occurs when a breeder breeds two dogs with a closely related genetic makeup, which results in physical and behavioral problems in the litter; all purebred dogs result from inbreeding.

According to VetInfo , the leading source for independent research about veterinarians, concludes that due to the relatively small pool of genetic variation in purebred dogs, physical issues like hip dysplasia and low immune systems result. Purebred dogs with immune system problems suffer from colds and infections more than mixed breed dogs.

Breeders acknowledge the consequences of their actions, and for the sake of making a profit, deceive the buyer into purchasing a pet that can carry a multitude of problems. Animal Rights Action warns the buyers of falling victim to “bad breeders,” the scammers of the dog-buying world.

The “bad breeders” create false papers for the puppies they sell, and when the pet matures, they do not remotely look like the purebred name written on their certificates. The result ends in the abandonment of dogs that end up in a kennel or the street.

If the owner in turn wants to keep the animal, genetic problems can arise that insurances will not cover due to it placed as a pre-existing disease or problem. Overall, the breeder receives the profit and wins.

According to Forbes, 99% of all Petland stores, where a substantial amount of young people flood to take pictures with the puppies and upload them on Instagram, receive their dogs from puppy mills.

Filthy, neglected, and on the brink of death, puppy mill mothers bare their litter in a makeshift cage with no freedom to roam. Urine and feces fill the densely-packed spaces, while most dogs turn into skin and bones.

“I always knew that the dogs in pet stores were overpriced and unhealthy, so we didn’t want to participate in something that’s so messed up. I’d always see pictures and videos of puppy mills and never wanted to support that,” Bacak said.

Puppy mills range all over America, though most “farms” can be found in rural, agricultural areas like Arkansas and Oklahoma. Puppy farmers, a name given to people that run puppy mills, view the animals like livestock, and do not create emotional bonds with the animals, leaving them enclosed in dark rooms away from the public eye, and giving them the minimal resources to survive. If the mother cannot produce a profitable litter, the dog gets put to death.

The difference between an animal shelter and a pet store resides in the amount of affection and care they receive. Shelter dogs undergo intensive care to rehabilitate them into family-loving dogs by the nurses and volunteers. Pet store puppies only obtain the minimal time of interaction in the play pens.

Senior Madison Stone knows first hand the love and dedication a dog needs from day one to thrive. Stone volunteers at Mostly Mutts, an organization whose main focus revolves around ending the number of euthanizations in metro Atlanta’s shelters.

“I’ve always loved animals my whole life. I do volunteer work at the shelter since last summer after church, to feed, love, and walk the dogs,” Stone said.

Stone found her passion of rehabilitating abandoned and neglected dogs at the early age of ten. Upon learning of Mostly Mutts, Stone took the opportunity to give back to the animals that filled her heart with joy.

“When I was around 10 years old, I had a birthday party and instead of me asking for presents, I asked if people would buy stuff for the dogs instead to donate to Mostly Mutts,” Stone said.

Stone advocates for people to adopt from humane societies and rescue shelters, but to not forget about the puppies in pet stores. Petland puppies do not receive any volunteer’s affection or time to play outside. Most of the day and night, the puppies sit in their cages.

“Those dogs are in the same spot as the dogs in the shelter,” Stone said. “They didn’t choose to be there. If everyone kept buying dogs from the shelters instead of Petland, then the Petland puppies would be where the shelter dogs are right now. It’s not about the difference of buying or adopting, it’s about getting those dogs out of that position of being stuck in a cage all day and all night.”

Humane societies and rescue organizations create large amounts of opportunities to get involved in helping animals in need. Mostly Mutts’ homepage contains a multitude of different ways to help out in their mission to rescue and rehabilitate animals.

A person 18 years or older with a filled out application located on their page can become a Mostly Mutt volunteer. Volunteering at the shelter provides community service hours, and can become a summer activity that fulfills an important purpose and shines light in the lives of these homeless animals. Along the lines of volunteering, one can donate a generous amount to any organization or rescue shelter, to provide for food, bedding, and medical supplies.

“Once I started working with all these dogs that were abused and not cared for at all, it made me realize how sad it actually was,” Stone said. “I’ve seen mean, really bad looking dogs turn into the most kind, good looking dogs ever just from two months of love and care. So I would say, you may think you’re just changing their lives all the way around at first, but they really change yours in the end.”