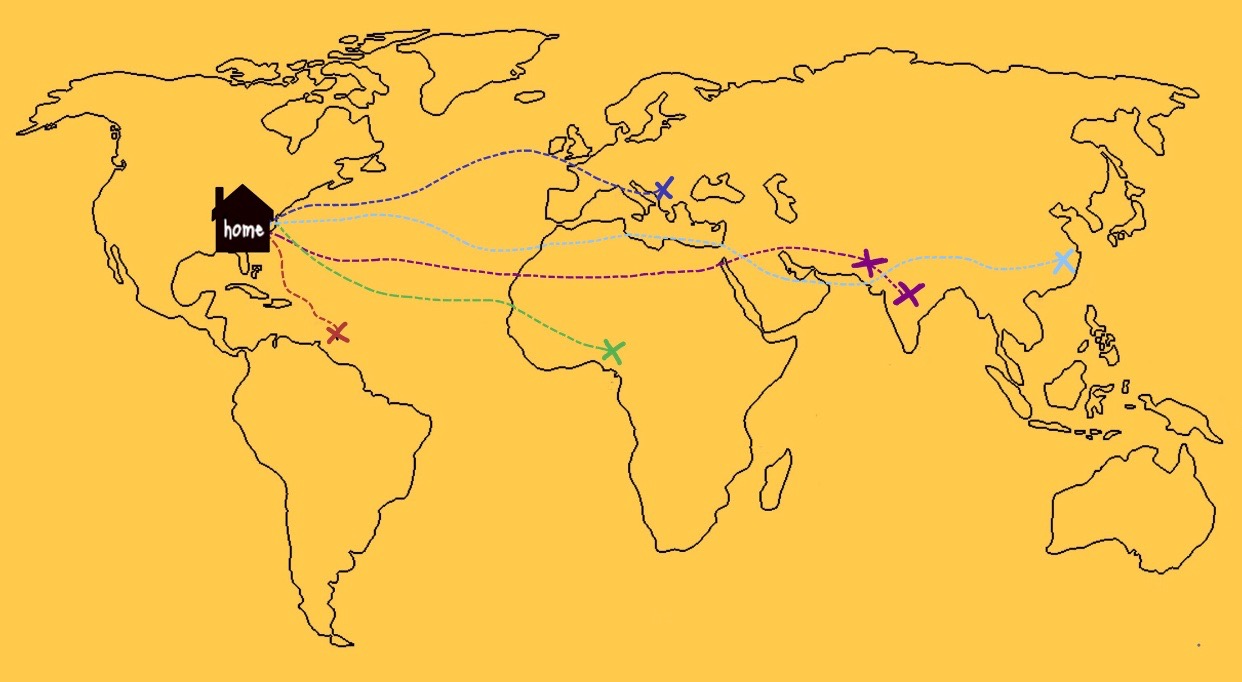 American schools represent visually the age old adage of the melting pot, salad, or stew: a plethora of cultures and backgrounds comprising the American dream. Students with all types of backgrounds and history can study and work together side by side. More than that, students can freely learn about other students’ cultures.

The majority of students also have a background of immigrant parents, and within this fast moving society, this reality of the American dream comes with different influences, expectations, and challenges.

Learning to juggle between cultures has become a common struggle for American-born students, raised in America but by immigrant parents, where expectations differ drastically from their non-immigrant parent friends.

Differences in how to dress, educational values, and home life, which include holidays and religious practices can often drive a wedge between students and their parents, sometimes even leading to close mindedness.

American born students with immigrant parents have to either juggle between their family’s native cultures and American cultures, and children often complain about having to choose between them.

How does being raised by immigrant parents affect North Cobb’s student body? The following five students provided insight into this process and the effect it has on them educationally and emotionally. Mixing America’s culture clash with their parents’ cultures can shape a student.

Through each student, they shared their parents stories and what made their parents decide to come to America, along with sharing their experiences with the differences between their native cultures while comparing to assimilation into American culture, whether they needed to give up aspects of their native cultures to “fit in” with American culture.

Students discussed the hardships while growing up in the American school system while dealing with parents’ culture and expectations at home.

Senior Kristen Bharadwaj was born in Atlanta while her mom was born in Pakistan and her dad was born in India. Bharadwaj’s parents both came to America to attend college, and both attended Kennesaw State University.

Junior Rola Goke-Pariola was born in Statesboro, Georgia, a small town in Southern Georgia, while her parents were both born and raised in Nigeria. Goke-Pariola’s parents moved to the United States in the late 80s. Her father served as a college professor coming to US to teach while her mother continued studying to become a social worker.

Senior Nikola Kolev along with his parents traveled from Bulgaria. Kolev’s family came to America for a chance at a better life not only for his parents but for himself and now his brother too. Although both parents had degrees there in profitable fields, engineering and law, the country slowly progress on an economic decline ever since the collapse of communism.

Sophomore Jennifer Dang was born in Jonesboro, Georgia, while her parents and her family came from Vietnam in hope to provide a better life and their kids. They believed America held a better environment to start a family.

Senior Danyel Cateau was born in America while her parents traveled from Trinidad and Tobago. Cateau’s mom grew up in New York, even though all of her family resided in their native Trinidad. After finishing college she went to further her education in Trinidad at the University of the West Indies. There, she met Cateau’s dad and fell in love. They came to the United States to give birth to her and live.

For Bharadwaj, Indians and Pakistanis are conservative, so she was raised with conservative values, but in America everyone has vastly different opinions, and her parents adopted American conservative values while she and her siblings chose more liberal political views. Although she had to change to cope with going to an American high school,  she would not wear Indian clothes to a place that didn’t have a lot of Indian people, and would not bring Indian food to lunch for school.

“It wasn’t hard in most aspects because some people are curious about Asian backgrounds, but I remember when I brought Indian food to school one time people would tell me that it smelled weird,” Bharadwaj said.

But beyond that, Bharadwaj immerses herself in both cultures equally because around her family she takes on her native culture, but while in school she becomes a more Americanized version of herself. Bharadwaj expressed the differences in expectations; in India and Pakistan people are more concerned about taking higher level courses and STEM classes but as an American teen, she has felt this as an exception to take more rigorous classes and go into the STEM field and focus more on grades than on the social aspects of school.

Goke-Pariola experienced many things while growing up that differ from the traditional American experience, ranging from the food being eaten, the music listened to, and the values being taught.

“Once you start reaching puberty, kids get meaner and they start to notice people who are different from them. But that never made me want to change myself, something like my name is what makes me unique,” Goke-Pariola said.

Being Nigerian American has not made it that much harder in school for Goke-Pariola. To her, when a substitute mispronounced her name, that qualified as the worst that has happened. She considers herself as a good balance between Nigerian and American. She only wishes for less ignorance towards the immigrant experience.

“Kids love to make fun of foreign names or make stereotypical jokes, but it would be great if they channeled that same energy into learning about the culture instead,” Goke-Pariola said.

Being both Nigerian and American has definitely shaped who Goke-Pariola become not only as a student, but as a person as well.

“I feel like I’m pushed harder in school because of the way my mom raised me. And as a person, I think I’ve been able to sort of lead two lives with double the experiences of someone who’s just american. And while it can prove to be difficult at times, it’s made me better prepared for the world,” Goke-Pariola said.

Kolev serves as the only student among the five that was not born in America. But Kolev’s Bulgarian background and American experiences have not had too many cultural differences for him to have noticed.

“The differences I’ve noticed are more sociocultural rather than just cultural. Here in America there are some different values for example here it’s taught that everyone should be treated equally however growing up you realize that competition is pushed onto everyone and that one’s goal in life should be to be better than everyone else rather than unifying together for the good of everyone,” Kolev said.

For Kolev, he has never felt that he had to give up aspects of his own culture to fit in, and he attributes this to his diverse upbringing that mirrors the diversity of America. But Kolev sees the American school system much easier than that in Europe.  Kolev believes to be more immersed in his own American culture, so he feels he will always be connected more with his birth country’s culture.

Kolev would not change anything at all about his school experience, as he sees having such a diverse school gives a great opportunity to be surrounded with other cultures and learn about them all. For Kolev the idea of juggling between two cultures became more of a learning experience about the world as a whole, to learn there’s people all over and that they all experience different environments.

While growing up, Dang did not notice differences between her native Vietnamese culture compare to American cultures but, still, there were small contrasts between her peers and herself. The most major contrast Dang have noticed were the practiation of religion, such as the place of worship and how chosen to worship. For Dang, she did not gave up much of her Vietnamese culture because her peers and friends knew that their cultures can differ and respect that.

Dang only chose to change her mindset, and she became more open-minded about controversial topics because as a child growing up, she had been surrounded by close-minded people throughout her life. She struggled at first because her spoken and learned language was Vietnamese, and while entering Pre-K, she adjusted to having to learn an entirely new and complicated language like English. Now as a sophomore in high school, Dang has become more immersed in the American culture due to growing up being surrounded by mostly and only American influences.

For Cateau, she definitely noticed differences between cultures, especially in food during the holidays. For Thanksgiving kids would have turkey, cranberry sauce, stuffing, etc. Cateau still to this day has never eaten any of that for Thanksgiving, as they do not celebrate it in Trinidad. 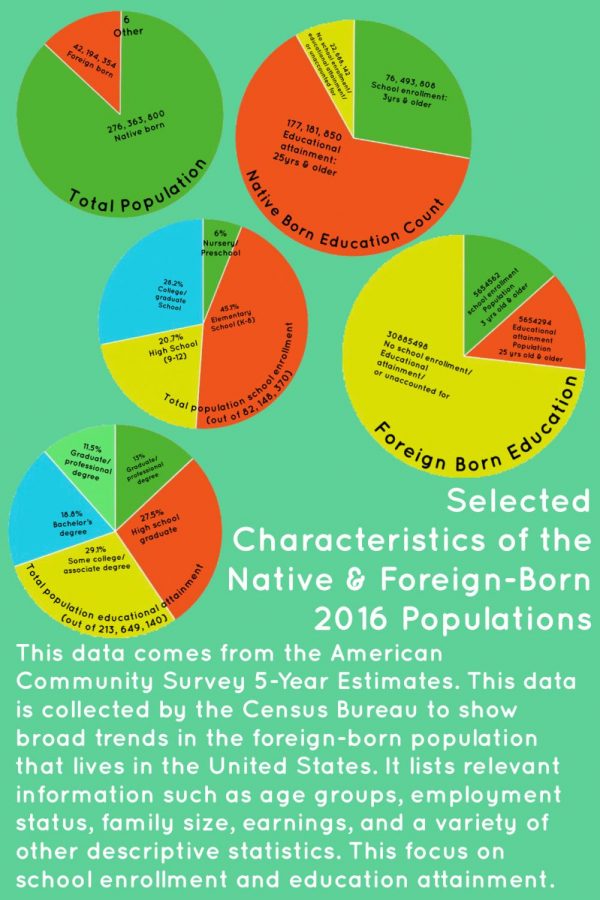 The first two weeks in February are similar to Carnival in Brazil in Trinidad. Normally, the whole country shuts down and everyone stays out of school and work to celebrate in the streets. However, it always falls on a school day, so Cateau does not get to experience Carnival as often as she would like to.

Cateau describes the Trinidad school system as much more difficult than America’s. Cateau feels as if she become more immersed in American culture. Although, Cateau visits Trinidad every year, but it doesn’t feel the same as being there year round.

“I can’t say there would be much to change about the system in America, besides the fact that it should educate through a more unbiased education system. We are taught everything from an American perspective, and a globalized perspective would be a bit better,” Cateau said.

Cateau joined the international studies Magnet program at NC intent to be exposed to even more cultures than Trinidadian and American. She wanted to be in a classroom filled with kids with the similar goals and of different backgrounds themselves, as well as being able to travel to experience these cultures.

“I feel like I am a more open minded and curious student because of my background,” Cateau said.

According to the Pew Research Center, about 1 in 4 children under 18 have at least one immigrant parent. Along with that the children of immigrants, on average, attain or even surpass the education levels of children of native-born Americans, even the children of immigrants with low levels of education. Being an American born teen and student of immigrant parents plays a major role in the student’s life and on their views along with personal culture values. Having to balance between cultures has given each student a wider perspective to different cultures then theirs.