Several students at North Cobb openly voice their opinions about the controversy toward gun restrictions in the country on social media, and in person. With several students having attended protests such as the March for Our Lives protest in Atlanta in 2018, they demonstrate a shift in how political and social justice concerns could change when left in the hands of young adults. (Angela Canales)

Several students at North Cobb openly voice their opinions about the controversy toward gun restrictions in the country on social media, and in person. With several students having attended protests such as the March for Our Lives protest in Atlanta in 2018, they demonstrate a shift in how political and social justice concerns could change when left in the hands of young adults.

Teens rise up for the cause against guns

Littleton, Colorado, 1999: Students Eric Harris and Dylan Klebold entered Columbine High School and gunned down 13 people, students and teachers alike. This tragedy initiated today’s immense debate over gun control and school safety. Since the 1990s, teen activism for gun control has grown prominent due to the devastating events that have taken place in 233 American schools. More than a decade later,  parents feared that their children would not return home on December 14, 2012, where 20 children from the ages of six to seven were fatally shot at Sandy Hook Elementary School in Connecticut.

With the deadliest school shooting in American history taking place only last year at Marjory Stoneman Douglas High School in Parkland, Florida, students across the country had started to develop fears about whether or not they would return home after school each day. With the lack of gun control in regards to American school safety, it seems as if today’s youth has started to take such manners into their own hands, organizing protests, marches, and initiating movements that would make their mark on American politics today.

“My friends knew Alyssa Alhadeff, one of the victims of the Parkland shooting, and seeing them experience the grief the came with losing a friend was more than enough to want to get fully involved in the cause,” NC teen activist Jordan Ross said.

Gun control remains a sensitive subject and a powerful debate, dividing the American people between whether or not the government should implement stricter gun laws. While they feel their lives could become threatened at any point on school grounds, it seems reasonable that teenagers would rise to become the leading force in demanding the implementation of such laws that would essentially raise a sense of security and protection in schools all over the nation.

The widely-known March For Our Lives organization prepares protests and marches that would help make students’ voices heard by American politicians and the rest of the world. On behalf of those affected by the mass shootings, the organization strives to make a change and push for stricter gun laws in order to reduce the chances of another tragedy taking place in a school building. Their mission statement includes the lines “we cannot allow the normalization of gun violence to continue. We must create a safe and compassionate nation for our youth to grow up in.”

These unprecedented protests, fully coordinated by students, took place in large cities all over the country, including Atlanta and Washington, D.C. Led by the youth, the rallies expressed the fear that thousands of American students feel for their lives when it comes to stepping into school to receive their education.

“I try to stay updated and educated on topics involving gun control, I lobby for gun sense political candidates, and I have attended town halls for the cause. I think they’re some of the most important actions for teens, aside from voting when they are eligible to,” Jordan Ross said. 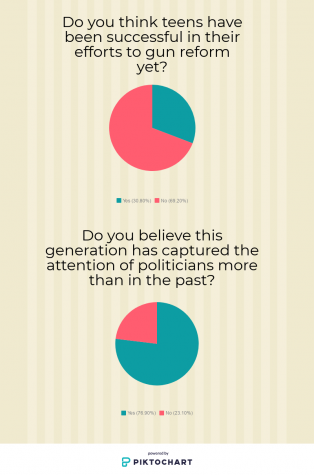 Parkland survivor, 18-year-old Emma Gonzalez, became a leading figure of the March For Our Lives organization and the #NeverAgain movement that took off in early 2018 after the devastating shooting. As an avid participant in the movement, Gonzalez became passionate towards trying to achieve a safer school environment for students, all while coping with the aftermath: an emotional rollercoaster that came with the traumatizing event.

“If all our government and President can do is send thoughts and prayers, then it’s time for victims to be the change that we need to see,” said Gonzalez in her February 2018 speech following the shooting. She went on to explain how despite the time period of grief and mourning they experienced, they still stood up to demand change.

Recently, a large spark in teen activism towards gun control reforms has broken out, not only towards school safety but towards the loose rules that determine whether or not a person can own a gun. The rise in devotion and compassion towards these movements lays in the hands of our youth, the ones mainly affected by the terrors and fears of mass school shootings. Fighting for legislative change and more than just prayers and condolences from the government, the youth of today’s America rises up to say that enough is enough.

“I think it’s important for teens to stand up and demand change because we are the ones in schools every day, and we are the age group that is being affected by tragedies such as the one in Parkland. If everyone relies on everyone else to speak up, no one will,” Jordan Ross said. 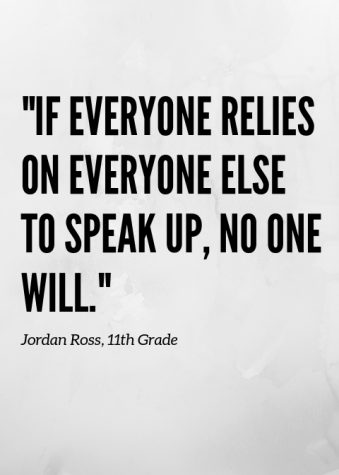 Teen activists continuously face criticism from adults, who feel that teenagers do not hold a place high enough in society to make demands from the government and other legislation. Previously seen as just ‘kids’, these teenagers mark their place as people who can speak for themselves on issues affecting them personally in schools.

At NC, young advocates for gun reform came together on April 20, 2018, to participate in the National School Walk Out, lasting 17 minutes in remembrance and honor of each of the students who died on the Valentine’s Day shooting in Parkland. The walkout did not only serve as a method to honor the late students but served as a method of civil resistance to address the lack of governmental action being taken.

The walkout caught local and national media attention, with high school students all across the country participating to make a statement. Students encouraged others to take a stand and capture the attention of American senators and legislature. Now an NC high school junior, Gemma Love participated in last year’s walkout, which had become widely unaccepted and criticized by teachers and school administration.

“I participated mostly because I didn’t understand why school shootings were continuing to happen and why the adults in control did not seem to do anything about them. I wanted to make a difference and enforce the statement that today’s youth is actually paying attention to these things and standing up for what is right,” NC junior Gemma Love said.

Although several students faced in school suspension and other consequences by the school administration, they believed that the increasingly important statement they made would overcome those consequences and potential marks on their records for universities and other higher education institutes to see. As an effort to prevent another tragedy like the ones at Columbine, Sandy Hook, Virginia Tech, and Parkland, the youth stands up to authorities and honors those affected by the shootings.

“I felt so helpless watching all of these things happen and not being able to do anything about it, so doing things like attending protests and the walkout gives you the feeling that you’re doing something and making a difference,” Love said.

Teens advocating for political change highlights a time in history where anyone can speak his or her mind with courage and bravery. This new shift in mindset turns heads in America, gaining attention from state and federal politicians who obtain the power to satisfy the demands of today’s youth. As determination and passion for this movement increases, it remains a possibility that new regulations for gun control from the government will arise.