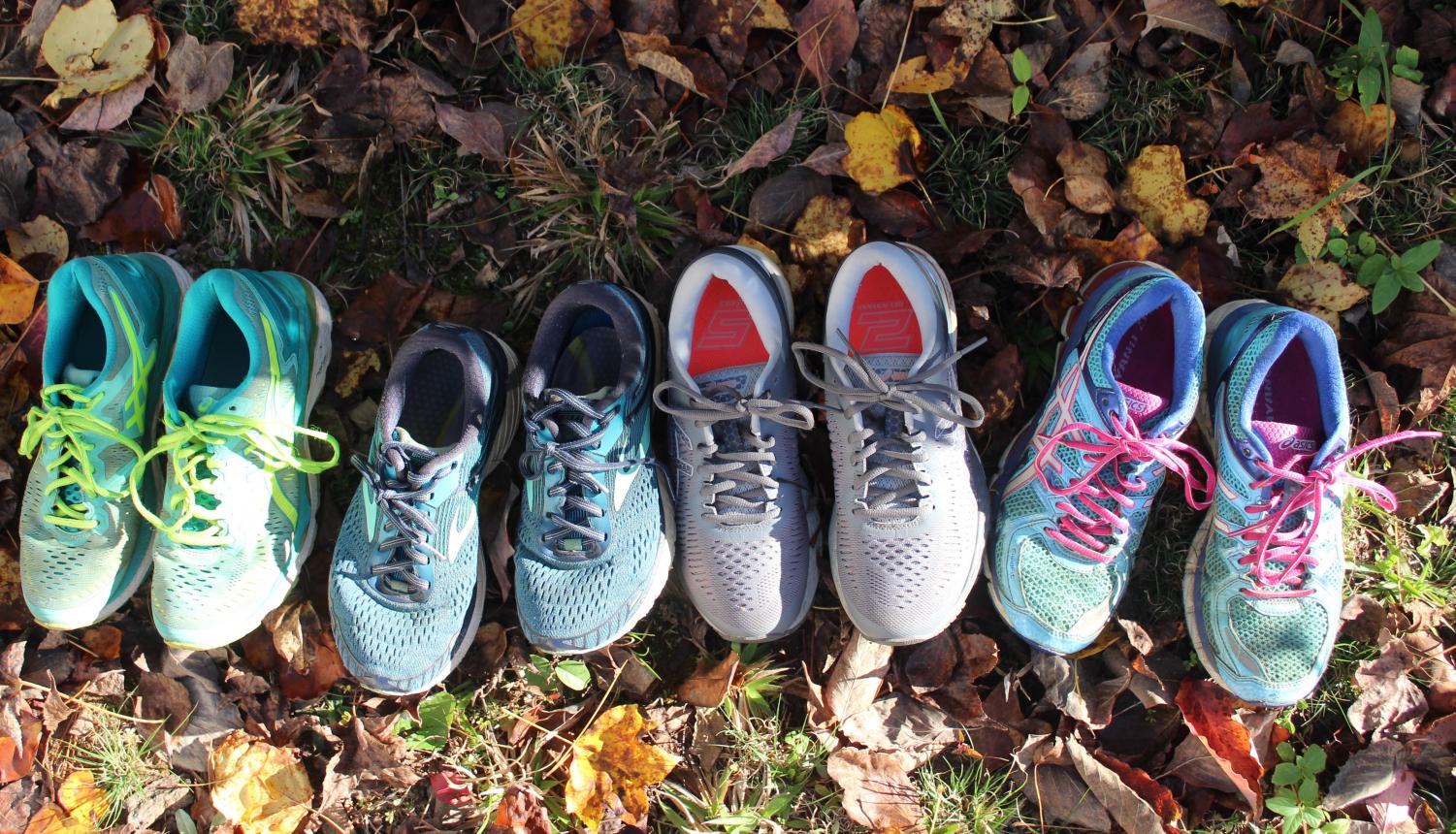 Each pair of running shoes gathered here will eventually travel about three hundred miles before being replaced, providing thousands of hours of healthy exercise. Running purely for physical benefit doesn’t provide the only reason someone might want to put on their running shoes, however. An increasing amount of studies show that exercise provides several mental benefits as well. (Jenny Loveland)

Each pair of running shoes gathered here will eventually travel about three hundred miles before being replaced, providing thousands of hours of healthy exercise. Running purely for physical benefit doesn’t provide the only reason someone might want to put on their running shoes, however. An increasing amount of studies show that exercise provides several mental benefits as well.

Enduring for the endorphins: An overview of running’s mental benefits

You see the trail before you and notice the smell of last autumn’s leaves. It mixes with the breeze as you begin to run, and soon you hear the sound of your feet as you hit the path. All remains quiet and peaceful, except for the birds and the leaves beneath your shoes.

Talk to almost any student about school, and you will find that moments of peace and quiet exist as nearly unreachable realities. They feel pressure to keep up their grades, participate in community service, and compete in sports, all in the name of their GPAs and college applications, and the competition between students only increases. Because of this, they report feeling almost constant pressure from the demands placed upon them. In a study by NYUNC done in 2015, nearly 50% of students said they experienced high levels of stress on a daily basis.

While a little stress lends itself to better productivity and motivation, high levels of stress can cause mental and physical damage, so becomes important to find a way to release that stress. Students do this in healthy ways, such as sports, or music, or through unhealthy practices, such as drug and alcohol use. Running provides an often overlooked way to work through stress without causing damage to the body or mind.

It remains nearly impossible to make it through a Physical Fitness class without hearing of the merits of lacing up your running shoes, usually from a purely medical point of view. Studies continue to show that running greatly improves cardiovascular endurance,  prevents osteoporosis, strengthens muscles, and improves one’s metabolism, among other benefits. The mental benefits of running remain less recognized, but nearly three-quarters of runners notice an increase in their positive well being after going for a run, proving running’s power to affect their overall health. 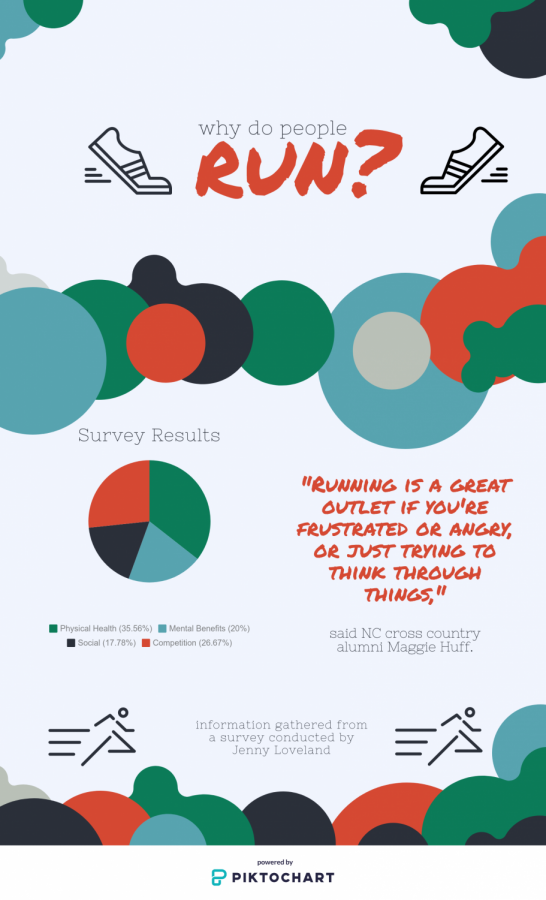 “Running has helped me think more about my long term health. The confidence I gained from finishing a difficult run has gotten me through difficult spots in life and generally helped out with my stress,” senior Simon Nguyen said.

Studies show that going for a run eases stress and diffuses anxiety and depression’s symptoms. The scientific evidence behind this shows that while running the brain releases endorphins, neurotransmitters in the brain that act as ‘natural painkillers’ and improve one’s mood, which often serves as a reward for enduring a difficult workout. This improved mental state caused by running becomes something teenagers arguably benefit more from than its physical results because teenagers suffer more from high stress levels than a need to maintain their metabolism. Although while just thirty minutes of running helps stress and anxiety abate, consistent exercise proves more effective in strengthening mental health by preventing stress from building up.

“I always ran because it kind of kept me sane. It is my release, my time alone, and I barely ever run with music because I like to hear the sounds of outside. It’s a peaceful zone for me,” Orchestra director and marathon runner Paula Krupiczewicz said.

Going for a run provides a much-needed escape from the noise and pressure of daily life. Dubbed a modern plague, noise remains all-pervasive in today’s society, whether it arises from traffic or construction, or chosen sounds such as music and podcasts. Whatever the source, sounds fill the air and moments of quiet remain elusive. Taking a moment to remove the airpods and just run improves mental health and restores the mind’s energy, enabling runners to think clearly without distractions. Running in silence makes it especially easy to sort through thoughts because of the rhythmic, repetitive actions that occupy the runner’s body while letting their minds wander. Because of this effect, going for a run can also serve as an emotional outlet.

“I first started running in the morning while my children were still sleeping, just so I could have that time alone. Now I still use that time when nobody calls me and I can just be alone. I love to start my day like that because I do a lot of thinking and get my head on straight. And I think that today people are bombarded with so much stimulus from people, from media, that some alone time awake is really healthy for everybody,” cross country Coach and American Literature teacher Sue Jackson said.

For those who struggle to run on their own, running in a group provides several benefits. Runners receive motivation from their peers to perform their best while running, creating the best physical outcome for them while enjoying time with friends. This can serve as a way for student runners to combine social interaction with a healthy, stress-relieving activity. Groups such as cross country, track teams, running clubs, or running buddies facilitate these results.

“Running makes it easy for me to stay in shape while having fun with friends and meeting new people,” NC alumni cross country and track member Lauren Reagan said.

Whether in a group or individually, running naturally lends itself to goal-setting, an effect that student runners benefit from learning to set and achieve academic goals. Usually, runners strive for better times in their chosen distance or even to just physically handle running a certain distance without walking. The struggle is usually more mental than physical while trying to meet these goals because the majority of running’s challenges arise from the mind. Working towards a goal involves pushing past mental boundaries as well as strengthening the runner physically. This acquired mental strength additionally aids runners in other areas of life, giving them the ability to persevere through other difficult or unpleasant situations, such as when student runners feel overwhelmed with a difficult test.

“I have seen runners come in as freshmen and work towards goals [in cross country]. That’s good for life, to set goals for yourself, work at something and then have a payoff. Even if it’s three years later, four years later, that teaches you some patience and that hard work pays off,” Jackson said.

As they reach these goals, runners simultaneously improve their confidence, memory, and concentration, skills that student runners benefit hugely from.

“Running has helped me be more focused and I feel that running has improved my work ethic in school,” junior and cross country member Malik Butler said.

As seen through these examples, personal experience, and scientific studies, running can have a powerful positive effect on the mind. Nearly all of its benefits apply directly to students and the struggles they face today, and while it does not solve every problem, it can serve as a way to hear silence in a world of stress and distractions.