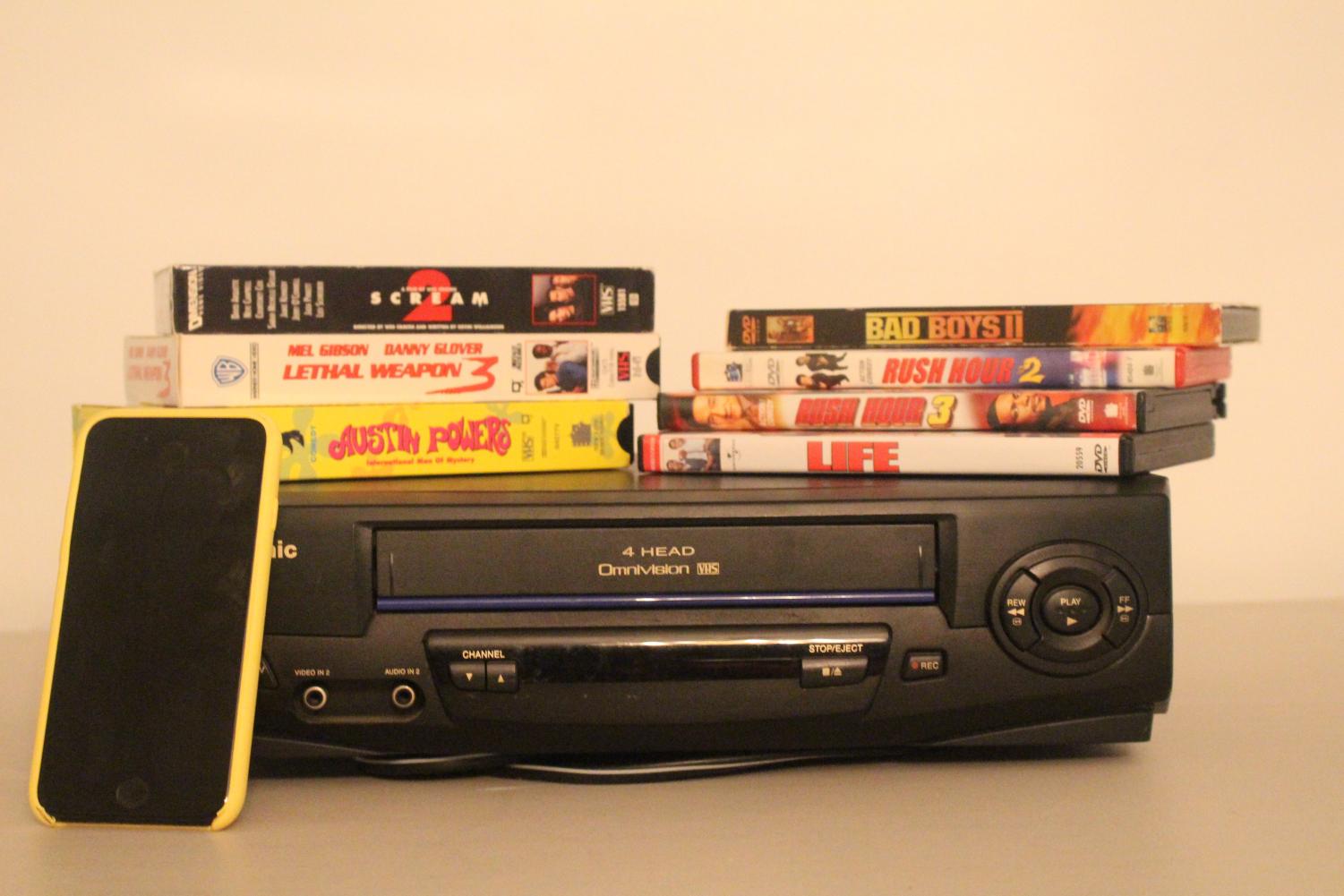 Throughout generations, people saw technology develop and continue to see it evolve. From rotary phones to Iphones, and VHS tapes to streaming services, everyday entertainment changes and improves. (Jemiah Clemons)

Throughout generations, people saw technology develop and continue to see it evolve. From rotary phones to Iphones, and VHS tapes to streaming services, everyday entertainment changes and improves.

The miscommunication between generations

As the Silent Generation begins to wither away, Baby Boomers [Boomers] battle health issues.  Younger generations coming after face new economic, social, and political issues in an increasingly technological world. Adults in Generation X [gen X] remain stuck in draining mortgages while Millennials drown in student loan debt. Generation Z [gen Z] face inevitable pressure to fix the problems of the world brought on by the generations before them. These prominent issues lead to the growing tension in society between different people in different generations.

In recent years, a large rift formed between Boomers and Millennials. The two cannot seem to reach common ground on controversial issues in the U.S.  such as abortion rights, climate change, or taxes. As a way to spite them, millennials coined the phrase ‘okay boomer’ on all social media platforms. Millennials and Gen Z use the term to point out certain behaviors they dislike in Baby Boomers. Boomers on Tik Tok express this feeling on behalf of the rest of their generation.

All generations grew up in different time periods and experienced different social, economic and cultural norms. This influences the mindsets and viewpoints on issues that affect people on a greater scale. Sexism, racism and classism all play a part in the generational conflict.

“The communication gap between generations is primarily due to technologies. The invention of the iPhone in 2004, text messaging instead of face-to-face conversations and social introversion due to technology all play a part in why we can’t communicate very well,” NC psychology teacher William Hargis said.

The Silent generation, today, averages the age of 75 to 80 years old. During childhood, this generation would experience one of the worst economic time periods in American history, The Great Depression. The nickname ‘the silent generation’ comes from the children during this time period working hard and keeping quiet. World War II also played a role in the development of this generation. Both men and women hard at work to fight for the American dream. A man’s duty included fighting in the war and providing for the family, while a woman’s job consisted of factory jobs or staying at home. major events instilled gender roles in men and women of this time and became a well-known expectation.

The social climate of this generation differs dramatically from the one today, growing up in a society that did not see everyone as equals, but instead as enemies. Racism and sexism dominated the way people thought and the way they lived their lives.  The idea that race, sex, age or class determined how much respect you deserve shined thrived then and continues to shine through today in this generation. However, the hardships and injustices faced paved the way for a better society today.

“Life was hard back then. I saw people who looked just like me being beaten and hosed in the street. Seeing young people get out [and] protest, makes me cry every time. This fight for equality should have ended years ago,” Haitian American immigrant Cesarine Jeanty said.

Despite their predecessors, baby boomers tend to make quite the boom when dealing with people from other generations. Boomers consume a large amount of media and their numbers on social media continue to grow. 90% of Boomers use social media and consume T.V., radio and magazines regularly. However, younger generations do not seem to like their media presence too much. Boomers, Millennials and Gen Z constantly go back and forth with each other on social media to represent their respective generations.

Baby boomers began at the very end of WWII when the soldiers came home. This means that the hardworking and silent generation raised them. Boomers believe in tradition, respecting elders and working hard to win rewards. Boomers grew up in a time that did not accept everyone freely. Their major events include the Cold War and the Vietnam War. Both events caused major chaos in the U.S. and still leave remaining effects.

Born from 1965 to 1980, generation X earned the nickname ‘The Karen generation’. The name Karen represents a stigma placed on individuals who cause a ruckus in public. On social media younger generations use skits to make fun of Gen X. Even though new technology came into existence later in their lives, the average Gen Xer spends nearly 7 hours on Facebook per week.  This generation grew up in the peak of the 20th century with artists such as Michael Jackosn, Prince, Cyndi Lauper and others who shaped the pop culture of this era. They experienced all the firsts of their generation.

“We got to see the world change in such a short period of time and  I didn’t even own a cell phone until my late twenties.  I think every generation has completely different life experiences and each one faces a new set of challenges. As far as fixing the communication goes… I’m not sure that we can,” AP world history teacher Jeffery Bettis said.

Gen X tends to receive criticism for a lack of knowledge when it comes to 21st-century technology. Looking to the generations after them, this leads to miscommunication and shift in intelligence between Gen X, Millennials and Gen Z. Due to this generation growing up in a time that did not require cell phones, computers or tablets, they typically do not depend on these things for everyday life. However, if they do need those devices every day, Gen X can work without them effectively. The dependence on electronic devices places a huge generational gap between them and younger generations.

Commonly described as lazy, unprepared and entitled, millennials do not catch a break from generational stereotypes placed on them. The average millennial goes into the “real world” with a participation trophy mentality and this eventually handicaps them in the end. 65% of the U.S. think millennials show severe entitlement and 85% of millennials agree. The blame for this cannot solely go towards millennials. Throughout history, people change and adapt their parenting styles to match those around them and the social climate. With electronic devices in the late 90s and early 2000s, this caused another wide-spread parental adaptation to happen.

With the birth of new technology, gen z immediately followed. New developments in the world play a large role in this generation’s upbringing. With social media bringing cancel culture, new trends and online businesses, gen z seems to live in a completely different world from those of other generations. This brings a new relationship dynamic between parents and their children. According to Science Daily, the number of parents who need help from their children reached 40% in 2020. The change in dynamic leads to children teaching the older generations both how to use and conduct themselves on the internet. This sudden reliance on children increased the disconnect between gen Z and their parents.

“Sometimes it feels like it’s up to us to fix the world and it makes me nervous because we don’t know what’s really ahead of us. It feels as though we’re destined to clean up a mess we didn’t make. I fear we might “mess up” in the same ways people older than we did. It’s almost like the world is in danger and we all have to be superman,” NC junior Harmony Harvey-Morris said.

In recent months, the world faced a pandemic, potential World War 3 threats, and an uprising in injustice against black people in America. Gen z, similar to the generation before them, did not hesitate to protest and take action. Also, gen z shows a special interest in politics with approximately 24 million people in this generation voting in the 2020 presidential election. Other generations tend to view gen Z as lazy, social media consumed adolescents that spend days on end learning new TikTok dances. Research from global consulting firm McKinsey and Company finds that this generation values individual expression, diversity and equality, education in all forms. Currently, in adolescence and young adulthood, this young group still needs to grow and mature to take on the world and society that those before them created.

The different life experiences and technology contribute to the disconnect between generations. The sudden changes in the world could possibly bring people together, no matter their age. Obviously, not everyone will befriend one another, but hopefully, in future years everyone can reach a common ground.  Large issues such as racism, classism and environmental issues will not suddenly disappear, but using those life experiences within each generation can help to make societal and world changes.