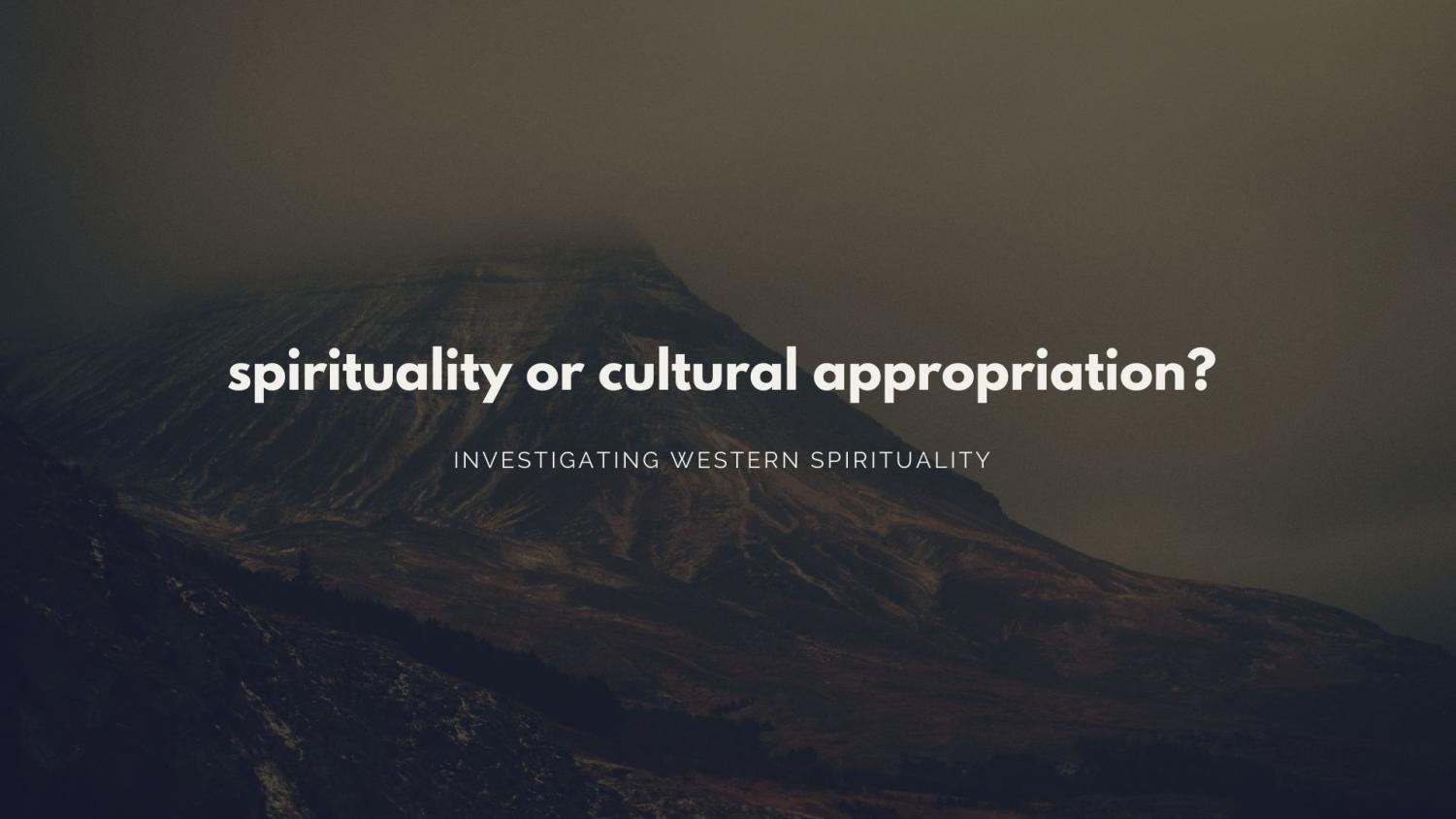 Cultural appropriation continues to surround our everyday lives, and the popularity of Western spirituality only worsened it. Historic practices such as yoga, meditation, and saging often become a white-washed, ingenuine version of their former selves. These honored traditions turn into for-profit business ventures and remove the history from the practices themselves. (Lainey Devlin)

Cultural appropriation continues to surround our everyday lives, and the popularity of Western spirituality only worsened it. Historic practices such as yoga, meditation, and saging often become a white-washed, ingenuine version of their former selves. These honored traditions turn into for-profit business ventures and remove the history from the practices themselves.

With TikTok and other social media platforms popularizing “spirituality” among Gen Z users, the question of if practicing aspects of spirituality does more harm than good arises. Global wellness, now a $4.2 trillion industry, planted its roots in a multitude of ancient traditions within a variety of religions. With the industry still on the rise, the topic of cultural appropriation and appreciation comes to light when observing the major aspects within it. Cultural appreciation, when you seek to learn from and understand another culture while respecting their beliefs, differs from cultural appropriation, cherry-picking ideas from different cultures without respecting the beliefs behind them or where they came from. In order to truly understand cultural appropriation, we must understand cherry picking. Choosing to implement only the most beneficial and profitable aspects from a culture, commonly known as cherry-picking, surrounds a majority of the wellness practices found in the Western world. Through cherry-picking, the original practices become white-washed, and the true culture is forgotten.

A common example of white-washed culture, yoga, has become extremely popular over the last few years, specifically within the white upper class. The popular sensation among this demographic devalues yoga because the Hindi people, forbidden from practicing yoga by the Europeans when they colonized India, practiced yoga in secret for hundreds of years. Today, seeing their sacred practice popularized among the oppressor without credit or acknowledgement of its origins represents a slap in the face to the Hindi people. In today’s consumerist society, the original purpose and values behind yoga do not show through in a typical practice. Yoga went from an action encouraging spiritual growth and a place to belong to a way to increase productivity. Today’s yoga, a prime example of cherry-picking, only incorporates ⅛ of the full practice. The eight limbs of yoga, rarely seen in practices in the Western world, encourage the full effects and values within the practice. In order to practice yoga respectfully, new yogis should ask hard questions, honor the origins of the practice, and learn from those who created yoga.

“Since yoga stems from ancient India in Hindu and Buddhist practice and I am neither Hindi or Buddhist, one way I can make sure I’m not disrespecting the culture or practice is by making sure I’m as educated as I can be. I have multiple books I have read and annotated on my own time to ensure that I am educated and understanding the background behind yoga and the principles of the practice itself,” UGA  freshman and yoga enthusiast Liz Carlin said.

Meditation, commonly associated with yoga, finds its roots in Buddhism. After incorporation within Buddhist and Hindu religions for centuries, the Western world recently popularized the ancient practice. The practice encourages heightened awareness and focused attention and shows many psychological benefits. However, apps such as Headspace and Calm have faced scrutiny from the Buddhist and Hindi communities for altering the sacred practice to fit today’s wellness goals. Meaning that instead of focusing on mindfulness, these apps offer plans that promote productivity, focus, and efficiency. These apps oppose the traditional teachings of meditation and offer a prime example of cherry-picking by choosing to showcase the profitable aspects of the ancient and sacred practice. Thankfully, apps such as Oak offer meditation plans that reflect the teachings of the practice, available plans include loving kindness, mindfulness, and achieving a clear state of mind. Insight timer, a more user curated app, allows members of the Buddhist and Hindi communities to create their own meditations and upload them for others to use. While the latter apps provide a more authentic meditation practice, divorcing mindfulness practices from their original religions culturally appropriates them and neglects the history behind those practices.

Recently popularized on TikTok and other social media apps, sage and the practice of smudging also faces cultural appropriation. With Native Americans facing oppression from the moment Christopher Columbus landed in America, the practice of smudging persevered for hundreds of years in secret. Sacred practices deemed illegal by colonizers forced those who partook in them to live in fear of going to jail or facing brutal punishment. The practices continued to face scrutiny until the American Indian Religious Freedom Act in 1978, and some areas such as dorms and apartment complexes still frown on it. The smudge stick represents more to Native people than a way to cleanse their area, it represents the resilience and strength imprinted into not only the practice, but the Native people themselves. Depicting sage and smudging as a “magic” practice harms Native Americans by depicting them as whimsical fantasy creatures, separate from humans. While non-Natives can practice smudging, knowing where the sage originates holds extreme importance. Today, sage often goes through unsustainable farming practices which makes it hard for those who practice to access it.

While the exact origins of crystal use as seen today remain unknown, we do know that they originated over 6,000 years ago by the Sumerians of Mesopotamia and the Egyptians to ward off negative energy. Crystals such as jade often adorned royals to keep them safe from harm. However, crystal use today aligns more with the Chinese teachings of life-energy and the Hindu pillars of chakras, found described in the Vedas written between 1200-1500 BC. Chakras and crystal use often correlate due to different crystal associations with the seven chakras. Crystal healing, also quickly sensationalized in the Western world, encourages one to place a corresponding crystal on the blocked chakra.  However, many people do not credit the origins of this now popularized healing method.

Debates on the origins of zodiac signs continue, but they either originated from the Sumerians of Mesopotamia, the Babylonians of Egypt, or within Ancient China. They individually determined that the stars in the sky can affect how people act on Earth, when Alexander the Great conquered Egypt all of their ideas merged and travelled to Greece where the zodiac signs of today seemingly originated. However, each individual country interpreted the new concept differently, for example the Chinese zodiac signs rotate yearly instead of 12 times within the year. Within the Indian zodiac system, the moon and rising signs within a person’s chart receive more emphasis than the sun sign. Despite the popularity in the Western world, astrology, still referred to as a pseudoscience, does not receive the same credibility as other sciences. However, in India, zodiac signs and astrology serve as a basis for many everyday decisions and in 2001, Indian scientists and politicians debated on allocating government funding to the science.

Karma, a recently decided basis for manifestation, describes the idea that what one puts out in the world comes back to them. Stemming from three major religions, Jainism, Hinduism, and Buddhism, the concept holds prevalence in everyday life even to those not practicing any of those three religions. By connecting actions and results, karma encourages good actions to avoid bad circumstances. Many historians believe that karma served as the basis for manifestation, a recently popular trend on TikTok and other social media platforms. Manifesting encourages people to “believe it and achieve it” by putting positive thoughts into one’s mind, positive things will start to appear around them. But unfortunately, those who manifest rarely acredit the origins and inspiration for the now sensationalized practice. The 369 manifesting method originates from a Hindi idea, popularized by Nikola Tesla. Tesla often told people the idea’s origins but people ignored him and continued to appropriate. Manifesting and karma share many common pillars, including the concept that we reap the consequences of our own actions and thoughts. Both concepts also include a “means to an end,” however they use different definitions. While manifesting and the Law of Attraction describe the “end” as physical abundance such as wealth, power, or possessions, karma defines it as perseverance and happiness.

As discussed, cultural appropriation surrounds our everyday lives. Ancient traditions often lack credit or financial compensation for ideas they spearheaded. As the health and wellness industry continues to grow, one can only hope that appreciation for the cultures who planted the seeds for the most prosperous aspects of the wellness industry increases. To avoid cultural appropriation and encourage cultural appreciation, those practicing can take time to learn about the history behind their pastimes and ensure that they practice with respect and honor towards those who came before them.