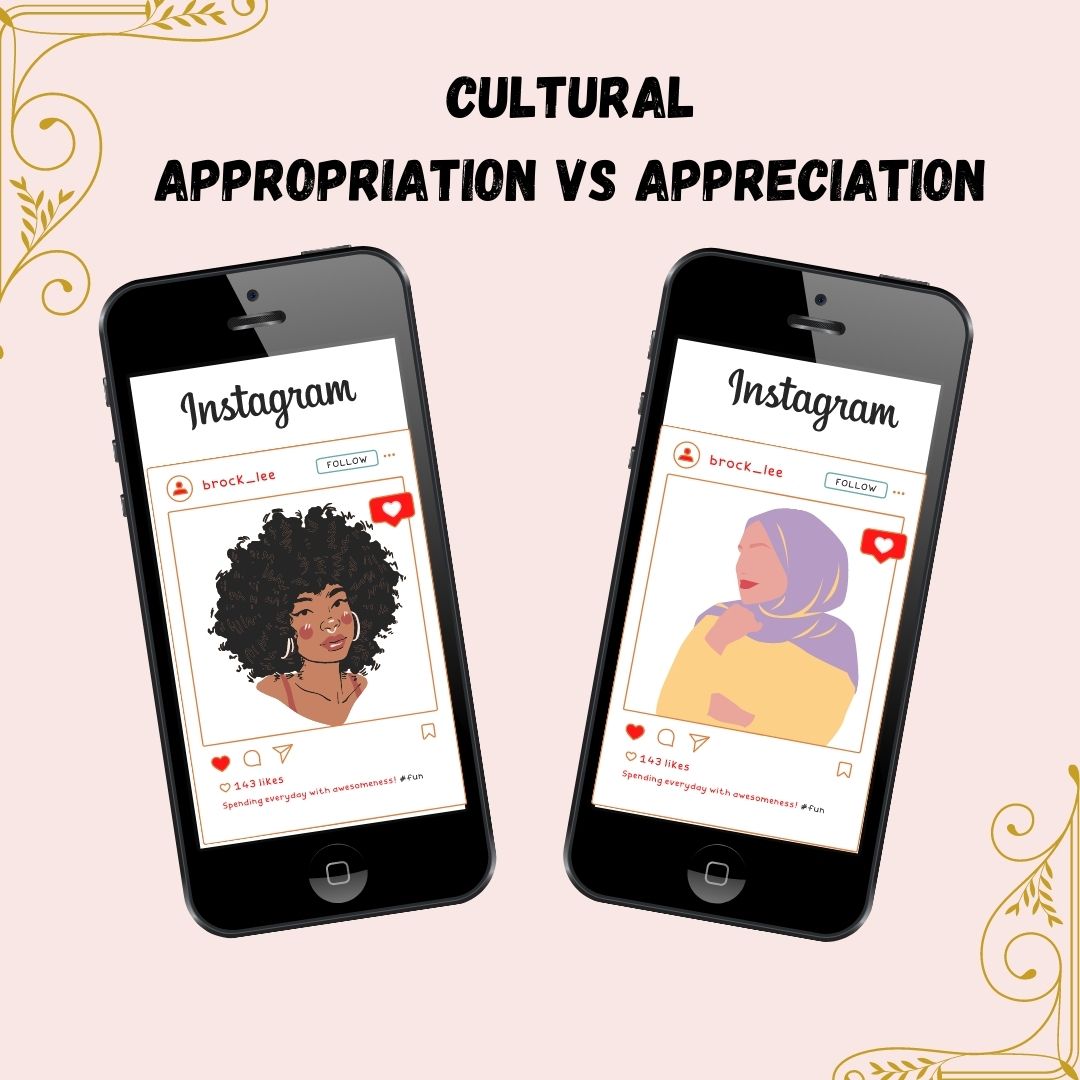 Cultural appropriation refers to the act of claiming a cultural element, which does not belong to you. It usually applies when a dominant group takes or borrows something from a minority group that gets exploited or oppressed. Most times, the significance of a cultural element does not get acknowledged or educated upon when appropriated. Not only does this behavior offend specific cultures, but it also develops a societal culture divide due to the lack of respect exhibited. (Erinn Gardner)

Cultural appropriation refers to the act of claiming a cultural element, which does not belong to you. It usually applies when a dominant group takes or borrows something from a minority group that gets exploited or oppressed. Most times, the significance of a cultural element does not get acknowledged or educated upon when appropriated. Not only does this behavior offend specific cultures, but it also develops a societal culture divide due to the lack of respect exhibited.

Every day, individuals blindly use non-dominant culture products and elements in ways that do not respect their original meaning. This contentious concept, defined as cultural appropriation, roots in colonialism from when white colonists raided cultural items from the Indigenous people. For example, Western art traders went to great lengths to acquire Native American artifacts, such as steel bronzes and carved tusks, to sell them in European marketplaces and claim them as their own.

Numerous individuals deem the terms cultural “appropriation” and “appreciation” as interchangeable, yet the two words drastically differ in meaning. Appreciation exhibits understanding of another culture in an effort to broaden their perspective and connect with others cross-culturally. Appropriation, on the other hand, displays the act of stealing a part of another culture for an individual’s own gain.

“In my mind, there’s nothing wrong with appreciating and participating in other cultures, but the problem is when they try to claim it as their own or participate with ignorance and lack of appreciation for both the culture and the people that culture belongs to. It’s all about respect. There’s a big difference between appreciating what a culture has to offer versus trying to claim it or take advantage of it with no real knowledge,” junior Miya Everage said.

In today’s day and age, cultural appropriation takes place in a variety of ways, ranging from brands selling objects associated with a specific culture to the media making these objects fashion statements. Gucci got chastised in 2019 for selling an $800 turban, which insulted a multitude of people of the Sikh culture. Not only did this well-known Italian company offend Sikh tradition, but they also gained an extraordinarily massive profit from a sacred artifact of which they hold no knowledge.

“You can be the most educated person, but just because you are educated through the web or the books doesn’t mean you are educated through experience. A first person experience is the greatest teacher of all and until you portray and feel every aspect of the cultural element physically, emotionally and mentally, it’s still appropriation. Lately, I’ve seen a lot of white girls getting box braids and cornrows without knowing the history behind it. Slaves would braid escape routes onto their heads as a map they would follow,” junior Jayla Roebuck said.

An example of this includes Kim Kardashian wearing her hair in Fulani (tribal) braids at the MTV Movie and TV Awards in 2018. Braids and ethnic hairstyles carry much more significance than exclusively the physical appearance. For decades, braiding techniques incorporated themselves into the DNA of black culture. Enslaved people utilized braids as a hiding place for food (rice and seeds) during their Middle Passage journey, as well as a secret messaging system for them to communicate with one another using braids as a map for freedom.

Critics believe that Kardashian should not claim elements of black culture because she does not actively live through the hardships of being a black woman. Despite the backlash, Kardashian continued to defend her decision in an interview with Bustle. She claims that she recognizes the importance of the story, but did it to match with her biracial daughter.

“I actually did that look because North said she wanted braids and asked if I would do them with her. Obviously, I know they’re called Fulani braids and I know the origin of where they came from and I’m totally respectful of that. I’m not tone deaf to where I don’t get it. I do get it,” Kardashian said.

Several individuals on Twitter found this comment quite disturbing due to the fact that she wore these ethnic braids while aware of the controversy she causes. Additionally, simply knowing the origin of the Fulani braids does not automatically mean knowledge of the significance they hold.

“Kim Kardashian in these braids is exhausting. The most annoying part is that at this point she knows what she’s doing, she knows what cultural appropriation is and that it upsets people yet she still chooses to do it because she knows it does not upset the right people or cost her money,” an anonymous Twitter personality said.

Because celebrities such as Kardashian set the bar for societal trends and beauty standards, sacred cultural elements become quickly normalized when they become a part of pop culture. These elements generally displayed themselves as trends (either in Hollywood, social media or in schools); therefore, an abundance of adolescents, teens and adults mindlessly take part in this activity.

The majority race historically criticizes a plethora of individuals for their cultural and ethnic characteristics, but now commended when someone from outside cultures possess those same characteristics.

“For the longest time, Asians have been mocked and insulted over our eyes but recently I see on TikTok and such when people have slanted or thin eyes, specifically white girls, and then suddenly everyone loves how they look. Black girls are constantly insulted or belittled over our curls or braids. Yet, people constantly curl hair or get braids with extensions. Lips as well, I’ve been told my lips were too big or that I have ‘very black lips’ yet that’s one of the attractions now,” Everage said.

Everage’s statement about the public continuously shaming the Asian community for possessing slanted eyes, echoes in an article on CNN about the “Fox Eyes” trend, which emerged on multiple social media platforms. Using makeup and other tactics, influencers attempt to lift and slant their eyes for an “almond-shaped” look. According to 17-year-old, Sophie Wang, kids in elementary school referred to her as “ching chong eyes”, which she constantly gets reminded of when scrolling on social media seeing people participating in the “Fox Eyes” trend.

“Blackfishing is when white public figures and influencers like to do everything in their power to appear black. Instead of appreciating Black culture from the sidelines, there’s this need to own it, to participate in it without wanting the full experience of blackness and the systemic discrimination that comes with it,” Thompson said.

Stereotypes repeatedly label minority groups based on a negative factor associated with their culture. For instance, society constantly assaults women who wear hijabs and targets them simply because they wear head coverings in respect of religious and cultural purposes. These hateful acts include associating these citizens with “terrorists”, in addition to general discrimination. While they face discrimination on a regular basis, viewers applaud celebrities who wear hijabs as a trend. Australian Youtuber Chloe Morello modeled herself wearing a hijab at the end of a youtube video, as she filmed a makeup tutorial in honor of “Eid” (a Muslim holiday). While a handful of viewers interpreted this as a thoughtful gesture, Morello received an abundance of backlash because she does not identify with Islamic culture.

Cultural Appropriation does not just boil down to one’s race, but one’s ethnicity in particular. Numerous individuals cannot differentiate the two; race demonstrates one’s physical appearance, while ethnicity refers to culture, traditions, language, nationality and religion. Actor Michael B. Jordan recently announced his new rum brand “J’OUVERT”, in honor of the Junteenth holiday. The name JOUVERT derives from a Trinidadian term that refers to the early morning celebrations that kick off the country’s annual Emancipation Day, which marks the abolition of slavery in the Caribbean in 1838. Consequently, Jordan received criticism from several Trinidadians, who found this extremely offensive. Although Jordan and the Trinidadian residents share the same race, they come from vastly contrasting cultural backgrounds.

While these exemplify only a minimal amount of instances of cultural appropriation, the concept advances beyond Hollywood, social media and pop culture. It ranges from simple hair accessories to a Halloween costume stealing attributes of another culture. Although the fine line between appropriation and appreciation frequently gets misconstrued, the differences between the two remain definite. A select number believe that participation in another culture does not count as appropriation if they respect the significance, while others think that the act of participation without the oppression that comes with the culture remains derogatory. However, these opposing viewpoints both agree that the rebranding and false ownership of cultural elements count as cultural appropriation.

Ultimately, most do not realize that cultural appropriation displays itself as an unconscious behavior. Whether society wants to admit it or not, the thievery of other cultures occurs on a daily basis and creates a cultural divide. Allowing uncomfortable discussions about the subject and self-education brings about a new degree of awareness, from which everyone will benefit.