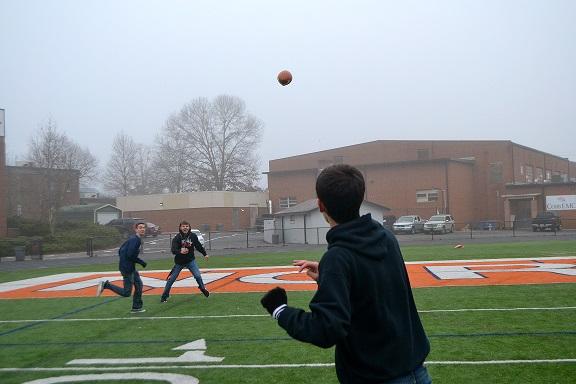 The sports writers play a pick-up game to invoke the NFL spirit in preparation for the Divisional Round.

After a well-fought Wild Card Round, four teams moved on, and four more await their chances to shine, welcome to the Divisional round playoff previews.

As many think being at home will give Denver the advantage, Pittsburgh thinks otherwise as they come off a massive win in Cincinnati. In week 15, these two teams faced off in Pittsburgh in one of the best games of the year, with the Steelers winning 34-27. This week we will see another down to the wire finish. Contrary to week 15, Peyton Manning will start ahead of Brock Osweiler. DeAngelo Williams is questionable again this week, but Fitzgerald Toussaint and Jarod Todman delivered last week in his absence, so no worries at the running back position. Also, after a huge hit to the head, Antonio Brown will not play, but Ben Roethlisberger with a right shoulder injury will suit up. Despite the injuries lingering in Pittsburgh, the Steelers will come out victorious as they still have the threats to expose Denver’s top-ranked defense.

Make it 12 in a row for the Chiefs after their blowout over Houston, but this week comes their biggest challenge yet. The last time these two teams faced off, the Chiefs manhandled the Patriots. In week four for the 2014-2015 season, on a Monday night, the Chiefs beat the Patriots 41-14. Fans thought the New England dynasty ended following this game, but the Patriots proved them wrong and ended up winning the Super Bowl. Now the Patriots look for back-to-back rings, and payback against the Chiefs. With injuries dominating the Patriots season, their most important one, Julian Edelman, looks to play this week, along with Chandler Jones and Devin McCourty. For the Chiefs, the big question looming is Jeremy Maclin, who suffered an ankle injury last week and continues to miss practice. Without Maclin, Alex Smith has limited targets to choose from, the best being Travis Kelce whom the Patriots look to cover well. Gillette Stadium stands as one of the toughest places to enter and win on the road, and in this case, it will not happen. Tom Brady’s clutchness in the playoffs will rise and Kansas City does not have enough firepower to contain him.

Arizona pummeled Green Bay 38-8 at home during week 16 in which the Cardinals defense produced nine sacks and returned two Aaron Rodgers fumbles for touchdowns. But Green Bay looked solid in round one, and can stay with Arizona if it protects Aaron Rodgers. However, even without Tyrann Mathieu, the Cards’ secondary can shut down the Green Bay receiving corps, which, given the Packers’ weak running game, would pave the way to an unproductive day for Aaron Rodgers and company. Carson Palmer should find his rhythm and get the explosive Cardinals offense going at home to give Arizona its first playoff victory since Kurt Warner’s final season.

The 15-1 Panthers came away with a close 27-23 victory during week six in Seattle, making it the Seahawks’ fourth straight blown fourth quarter lead. Since then, Seattle learned how to win in the fourth, posting a 9-2 record over its past 11 games, including last week’s 10-9 wildcard victory in Minnesota (courtesy of Blair Walsh). The Panthers, which feature six All-Pros, the most in the league, are well-rested and prepared to rematch the Legion of Boom in the comfort of their own home. Cam Newton will put up numbers as usual, but nothing comes easy in the playoffs, and few teams have more recent post-season experience than Seattle. Marshawn Lynch should make his highly anticipated return this week and despite the 15-1 record and dominant defense led by Luke Kuechly, Seattle can run the ball on Carolina, setting up play action and allowing Russell Wilson to extend the play and find receivers downfield. This game could turn into a shootout if both offenses come ready to play, and Seattle’s big-game experience will give them the edge in this one, setting up a divisional showdown in the desert for the right to play in Super Bowl 50.