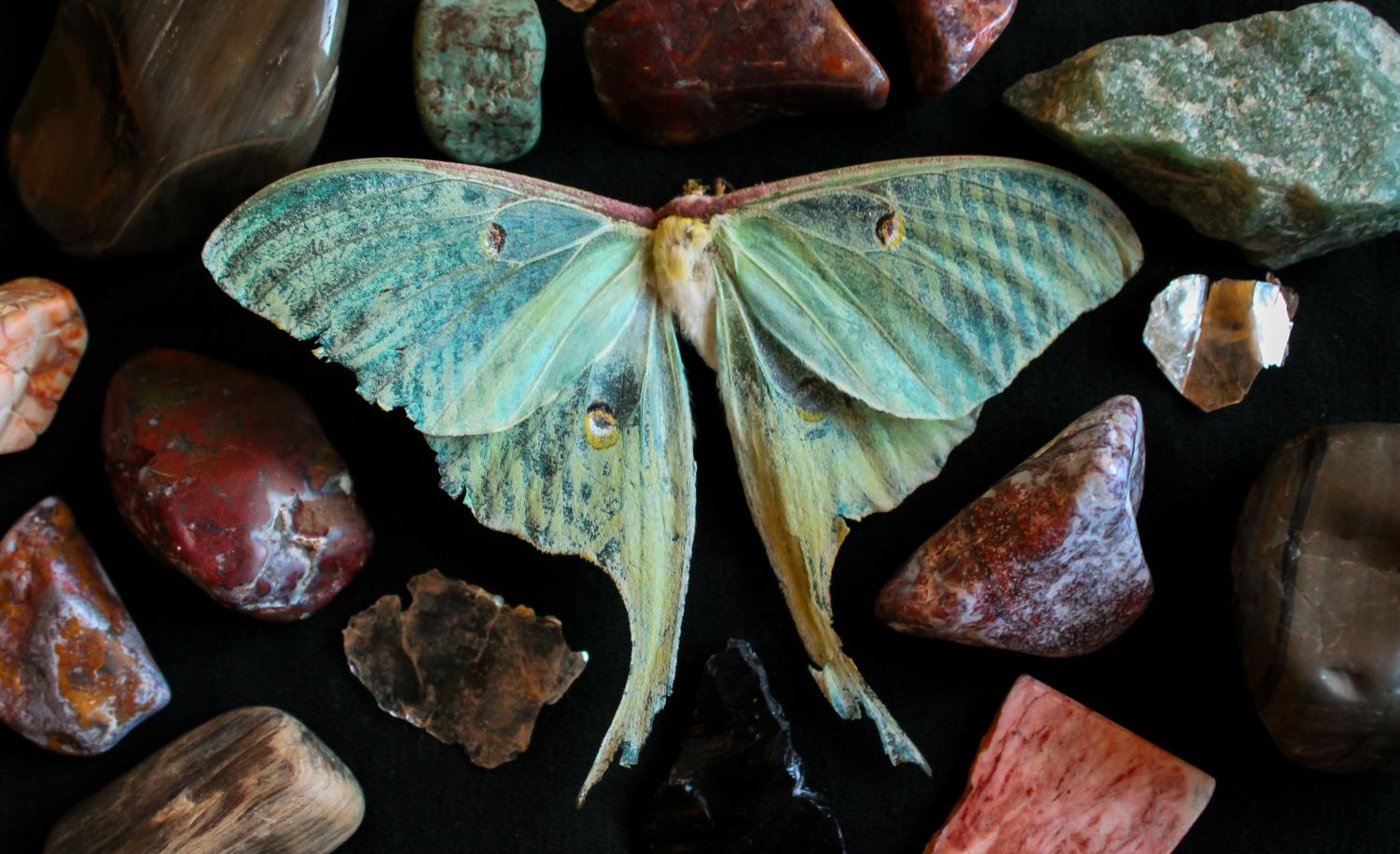 While a relatively small field in science, entomology plays a large role in the lives of everyday people, frequently without them even knowing it. Intertwined in the way that humans grow food, interact with the environment, and understand the nature of the world on a small scale, entomology remains applicable to nearly every part of life. (Jenny Loveland)

While a relatively small field in science, entomology plays a large role in the lives of everyday people, frequently without them even knowing it. Intertwined in the way that humans grow food, interact with the environment, and understand the nature of the world on a small scale, entomology remains applicable to nearly every part of life.

Picture a summer evening: fireflies turn front yards into light shows and the droning sound of cicadas fills the air. Gathered around each porch light, a congregation of moths flutter. Those who look can find insects nearly everywhere. As a testament to this fact, scientists have calculated that for every human, roughly 200 million bugs live somewhere on the planet, a number that hints toward just how much influence insects hold over life on Earth.

Entomology, the branch of zoology covering the study of insects, extends far beyond just catching bugs and studying them under a microscope. For example, forensic entomology has helped to solve crimes and questions surrounding the death of animals or people. When something (or someone) dies, insects move in to begin the body’s decomposition process. Forensic entomologists study these insects, carefully observing the life cycle and conditions of bugs found in decomposing corpses. By tracking these statistics, entomologists can provide a possible picture of the time and conditions of how the body died, assisting in the process of investigating the death.

“I get called into homicide or animal cases whenever they occur and process them.  I testify in court when subpoenaed, so every day is different. Insects are so important to our world and ecosystem and there are so many careers out there in the field,” forensic entomologist Dr. Gail S. Anderson said.

In 2018, Anderson used her knowledge in forensic entomology to exonerate a woman convicted of a murder she did not commit. Prior to Anderson’s involvement, the woman had served time in prison for 17 years.

Although its applications in criminal cases remain important, forensic entomology impacts the average person on a much more frequent basis outside of the court of law. In other sectors of forensic entomology, scientists handle food contamination cases and infestations, dealing with pests that threaten the safety of everyday people.

Insects can also serve as a way to measure the conditions of the habitats humans and bugs share. Indicator species, like the name implies, show the changes in the health of an ecosystem, allowing scientists to measure whether or not conditions in the area have shifted. For example, in recent years, populations of Monarch butterflies, a popular indicator species, have declined, reaching less than 1% of their past population. By studying and tracking their populations, entomologists have addressed environmental issues that affect the butterflies and other species of insects and animals, ensuring that this portion of the country’s wildlife remains for future generations.

Insect populations have declined by 45% in the last 40 years

Other kinds of insects provide insights into different parts of our world, such as the water system.

“There’s a group that we call the EPT taxa, it’s these three orders.  Ephemeroptera, Plecoptera, and Trichoptera, which are stoneflies, caddisflies and mayflies. And these three groups are very, very sensitive to water conditions. You can actually tell a lot about how polluted the water is if we don’t find them. If it’s really good water you’ll find all three of them. If it’s really bad water you find maybe a few different species,” University of Georgia graduate entomology student Gabriela Cardona-Rivera said.

Like the study of monarch butterflies, keeping tabs on the EPT taxa enables entomologists to safeguard the places they inhabit. This proves essential when entomologists attempt to control pests in situations such as unwanted insects in agriculture or public spaces such as parks. While the extent of pest control varies depending on the needs of the location, maintaining a balance between each kind of insect plays an essential role in keeping these places healthy.

“It’s a very fragile balance. If we weren’t to interfere with any of these ecosystems, these pests may well be looked after by some of the natural enemies, but in an agricultural situation, most people, when they have apples or potatoes or strawberries or whatever, aren’t really very tolerant of a lot of cosmetic damage to their fruit. They want really clean looking fruit, and so we have to kick the game up a bit and control those insect pests at a level higher than they might be under natural situations, but we still have to make sure that we’re not upsetting the balance of nature,” University of Guelph professor Cynthia Scott-Dupree said.

Through this quest to achieve equilibrium in agriculture, the work of integrated pest management has evolved, gaining nuance as scientists create new avenues for pest control and the public embraces them. Attitudes towards alternative options have also shifted towards greater acceptance, leading to a broader market of available insect control methods offered by entomologists working in pest management.

“When I started [working in entomology], there was a much greater reliance on the use of conventional pesticides to control pests, but we are moving away from that, probably for two reasons. One, that there are fewer insecticides available that deal with a lot of the pests that we have to deal with. And secondly, because I think there’s a stronger voice for people to find things that are more environmentally sustainable than higher reliance on chemicals,” Scott-Dupree said.

Although entomology jobs such as pest management may seem obvious, others go unseen just as the insects they involve frequently do. Certain insects pose an irritant and danger outside of agricultural fields, but the work of entomologists who curb their populations in public places reduces this. For example, black flies, an insect similar to mosquitos with a more painful bite, remain largely unknown because of diligent pest control work done by entomologists.

“Most cities have mosquito control districts. The same way that they have city planning and people who pick up trash, there are people who are employed in major metropolitan areas to treat local streams against mosquitoes and black flies, because they emerge in big numbers and ruin the festival that you’re throwing downtown,” University of Georgia graduate entomology student Sophie Racey said.

Beyond limiting the number of itchy arms and legs at summer celebrations, this kind of spraying helps to reduce dangerous diseases spread by mosquitoes. Scientists have calculated that mosquitoes serve as the most common carrier of disease to humans, and reducing the density of mosquitoes in well-populated areas helps mitigate this risk. Paired with nuanced and environmentally responsible forms of pest control, this section of public health has gradually improved thanks to entomologists.

Through these jobs and others, the work of entomologists affects everyone on Earth, although their contributions sometimes go unnoticed like the insects they study, protect, and manage.