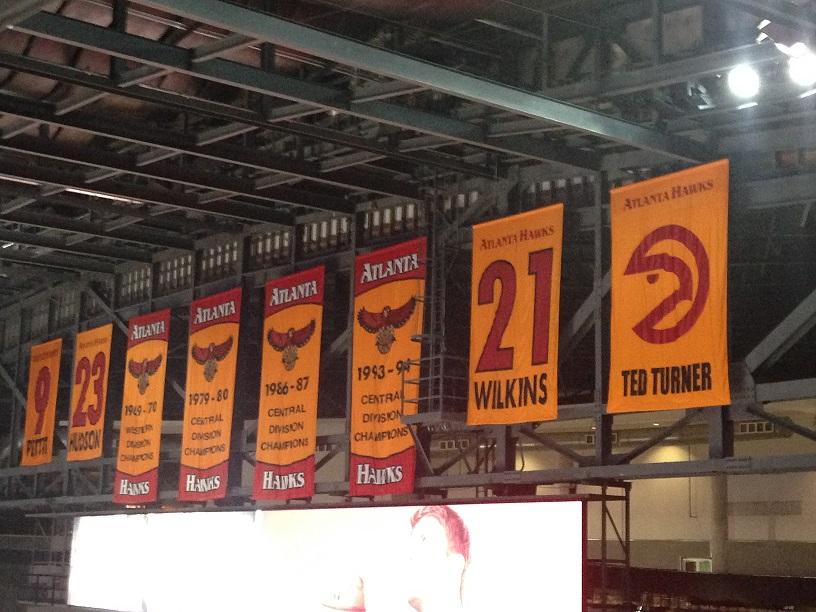 True to Atlanta: An in-depth look into the Hawks’ rich history

Since 1946, the Hawks have been a steady franchise. Buffalo served as their first location, nicknamed the Buffalo Bisons. Only 13 games into the regular season, the franchise moved to Illinois. After seven years as the Tri-City Blackhawks, they moved yet again, this time to Milwaukee, but then immediately relocated to St. Louis where they were finally named the Hawks.

In 1954, the Hawks drafted Bob Pettit who later on became an MVP, and in 1957 the Hawks advanced to their first NBA finals in history against the Boston Celtics. Despite the double-overtime thriller in game seven, the Hawks lost the series.

A rematch ensued the next year,  and this time, the Hawks won the series 4-2 behind Pettit’s 50 points in game six. Throughout the St. Louis years, the Hawks remained contenders, losing twice more to the Celtics in the Finals. Finally in 1965, the Hawks relocated to Atlanta.

Even though the Hawks had ample success in St. Louis, the time was right to move to a new city, especially considering the miniscule size of their arena. A rebuilding phase began in Atlanta. In 1977, Ted Turner bought the team and assigned Hubie Brown as the head coach, who led the Hawks to their first division title in Atlanta and also received the Coach of the Year award.

In 1982, the Hawks signed one of the brightest stars the NBA ever saw, Dominique Wilkins. Wilkins regularly led the Hawks to 50+ win seasons, but the team rarely advanced far into the playoffs, until they reached the Eastern Conference Finals against the Celtics, where the magical matchup of Wilkins against Larry Bird took place.

Throughout the years, the Hawks signed many familiar names, such as Spud Webb who won the Slam Dunk Contest in 1986, Mookie Blaylock, and the coach Lenny Wilkens.

Starting in 1994, the Hawks fell back to Earth and began playing like an average NBA team. Their most iconic addition was Dikembe Mutombo, famous for his extra long pointer finger he used to swat all the balls coming his way. 1998 proved the Hawks’ last season at The Omni, their court.

In 1999, Phillips Arena was introduced to the Hawks and still remains home to them today. At first, Philips Arena represented anything but friendly confines for the team, as they kicked off their first season with less than 30 wins and did not reach the playoffs for eight straight years. In 2004, the Hawks were sold to a group of executives called Atlanta Spirit by Time Warner, and in 2005, the Hawks signed Joe Johnson and Zaza Pachulia, hoping to bring life to the struggling team.

Two years later, the Hawks were still putrid, but drafted Al Horford with the third pick of the 2007 draft, who finally offered a glimpse of hope for the team after helping the team win their first season opener since 1998. They made playoffs that year despite a losing record, and surprisingly brought the powerhouse Boston Celtics to seven games. After that season, the Hawks consistently made the playoffs, but not advancing far, reminiscent of the Dominique Wilkins era.

In the 2009-10 season, the Hawks claimed their first 50 win season since 1998 and made it to the second round of the playoffs before being swept by the Orlando Magic. After the loss of Joe Johnson, Josh Smith, and Zaza Pachulia to free agency, the Hawks went on a signing spree,  which included Kyle Korver, Paul Millsap, Mike Scott, Pero Antic(the first Macedonian player in the NBA), and coach Mike Budenholzer. Last season, the Hawks earned the eighth seed in the Eastern Conference without injured Al Horford the whole year. In the playoff series against the Indiana Pacers, the Hawks looked like all-stars. Winning the first game in Indiana made them appear as a better seed than last. However, after a well-fought series, the Hawks sadly lost in the seventh game.

This season the Hawks look to bounce back from last year’s campaign. Their newest addition includes Thabo Sefolosha, a shooting guard from Oklahoma City. In the NBA draft, they acquired Michigan State’s Adreian Payne. This season, Budenholzer is eager to bring a trophy to the franchise and the Hawks believe they have it in them. Atlanta certainly expects to finish better than eighth this year, especially with Al Horford returning.

The Hawks have never been known to possess a huge fan base. At North Cobb, I surveyed 100 students, 25 from each grade level, regarding whether they are a Hawks fan or a non-Hawks fan. The results are displayed in the infographic, which shows that the majority of people are not Hawks fans. Being an avid supporter of the team, I expected North Cobb to show their loyalty as well, but the team remains largely unknown, as many students asked me what sport the Hawks even play.

The Hawks franchise proves unique. They moved from place to place, reached the Finals, added one of the best players in history, and then became completely silent. All Hawks fans are looking for something new now, and that something is a trophy. If the Hawks were to finally win a ring in Atlanta, maybe their name would finally be exposed.

An Interview with a Man Behind the Hawks Action

My father, David Schindler, works at Philips Arena where the Hawks play. A main reason why I love the Hawks so much is because he receives tickets to the games, which leads to my frequent attendance.

David has worked at Philips Arena since March of 1999, when he moved here because of the new job. He used to work in Washington where the Washington Wizards and Capitals play. At Philips, he is the Vice President of production and creative. He leads the game presentation department, video production department, and creative services. His main responsibility is entertaining the fans at Hawks games and using opens, games, and prizes, such as the famous t-shirt cannon. Other than Hawks games, he also covers the WNBA Dream games, concerts, and the circus. He enjoys leading his team and creating experiences for fans.

“It’s good to know people leave the arena having fun because of something I created,” Schindler said when asked what he enjoys about his job.

When he works at the Hawks games, he actually gets to watch the game because part of his job is knowing the players and how they play together. Even though he was born and raised in Boston, his loyalties remain with the Hawks.